"Battle of Stars" the more the better will it work? 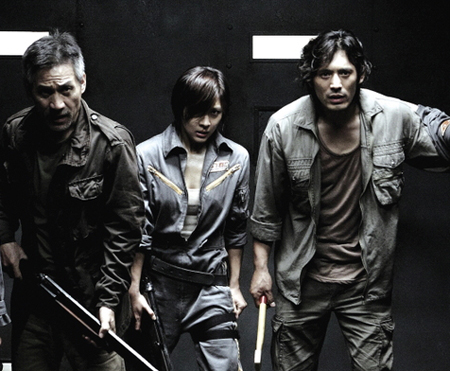 They say the more the better. Will more lead actors in one movie be better too? Movies with many top actors in one place are preparing to meet fans continuously.

She's back as a female warrior from being stuntwoman Gil Ra-im in "Secret Garden". Actress Ha Ji-won has finished filming the 3D blockbuster movie "Sector 7" (director Kim Ji-hoon, produced by JK Films) and is about to be released.

"Sector 7" is about the crew on an oil prospecting ship fighting with an unknown creature. Besides, Ha Ji-won there is a massive cast made up of Ahn Sung-ki, Oh Ji-ho, Song Sae-byeok, Park Chul-min, Cha Ye-ryun and others. A spokesperson for "Sector 7" says, "The actors' roles, a supportive scenario, fancy attractions will make this work. It will be the hit of the summer".

"Tower" is a blockbuster about a fire happening in a high-rise building in the middle of the city and the people that fight to survive from it. Director Kim Ji-hoon from "Sector 7" has the megaphone.

Sol Kyung-gu is fireman Kang Young-gi who dives into the fire to save another soul. Son Ye-jin is Seo Yoon-hee, the restaurant manager of the building that is on fire. Kim Sang-kyung is Lee Dae-ho, the facility manager.

Known as the Korean "Ocean's Eleven", "The Thieves" (director Choi Dong-hoon and produced by Caper Films) was an issue from the start for being the Choi Dong-hoon team and new faces. Choi Dong-hoon's previous works, "War of the Flowers" and "Jeonwoochi" cast Kim Yun-seok, Kim Hye-soo and Jun Ji-hyun have joined the team. Also, Kim Soo-hyun who rose to stardom from KBS 2TV "Dream High" has confirmed cast, establishing a firm base of organization.

"The Thieves" draws the episodes of thieves that try to steal a diamond worth 40 billion won, hidden in a casino in Macao. It is also in question if director Choi Dong-hoon can carry on his relay of hits starting from "The Big Swindle". "The Thieves" cranks in in May.

""Battle of Stars" the more the better will it work?"
by HanCinema is licensed under a Creative Commons Attribution-Share Alike 3.0 Unported License.
Based on a work from this source