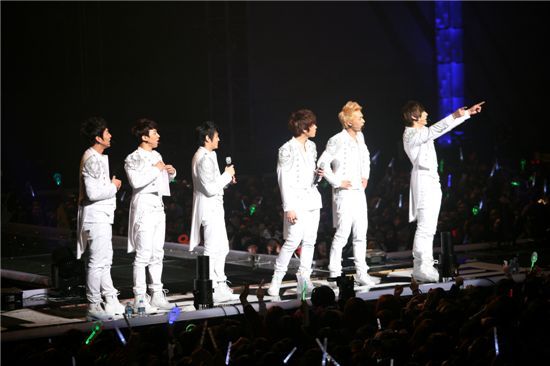 Boy band BEAST performs at their concert "WELCOME TO THE BEAST AIRLINE" held at the Olympic Stadium in Seoul, South Korea on December 12, 2010. [Cube Entertainment]

"From a recycled group to a rediscovered group". This was the phrase written on the video shown at boy band BEAST's first-ever concert titled "WELCOME TO THE BEAST AIRLINE" held at the Olympic Park in Seoul on Sunday.

Every member of the group composed of Yoon Doo-joon, Hyun-seung, Jun-hyung, Yo-seop, Dong-woon and Lee Gi-kwang experienced all sorts of mishaps before debuting as BEAST in October of last year -- from debuting in a different group which failed to see success to being booted off a reality show to the agency closing its doors due to failed business.

Yet in just six months of releasing their first record, BEAST took first place on a cable music show and started garnering popularity in Asia after touring in several countries in the region. Their debut showcase in Japan last month attracted a crowd of 10,000.

Now making headway into establishing themselves as a well-known artist at both home and overseas, the boys talked to media outlets just three hours ahead of achieving their biggest dream as newcomer singers.

Q: How do you feel about getting to hold a concert under your name for the first time? And what's the theme for it?
Yoon Doo-joon: Since our debut, we had always said it was our dream or goal to claim the top prize on music shows while holding our own concert has been the biggest of them and we're just a few hours away from achieving that. We're so nervous and happy.
Yo-seop: The theme for the show is "Welcome to BEAST Airline" and we'll become pilots who take flight with our fans. We will lack in some aspects because we've had to prepare the concert while everyone is busy but we've been practicing over six hours everyday by creating a stage exactly the size of the stage we'll stand on tonight at the arena next to where we're performing.

Q: We heard you will perform in duos tonight. What's this about?
Dong-woon: Each team, composed of Jun-hyun and Yo-seop, Lee Gi-kwang and Hyun-seung, and Yoon Doo-joon and myself, are going to announce a new song each. We composed and wrote the lyrics to the songs ourselves after discussing with each other on the musical or vocal tendency each member wants to pursue.

Q: Are there any performances you have planned for your fans in particular?
Dong-woon: We mostly promote only the title tracks and follow-up tracks to our albums but we'll perform many of our songs from our albums with new choreography and arrangements.
Yo-seop: I think "Thank You" which I and Jun-hyung will sing will be meaningful since we wrote and composed it thinking of how grateful we are of our fans.
Lee Gi-kwang: And you'll get to see Dong-woon and Yo-seop acting even more cutesy.

Q: What did the entertainers that you work with on variety shows say when they heard you're going to hold a concert?
Lee Gi-kwang: I told the cast of MBC's "Hot Brothers" but they're all very busy all the time and the hosts of KBS talk show "Win Win" congratulated me on it.
Yoon Doo-joon: I really wanted to invite the cast of MBC sitcom "All my Love" to the concert but I couldn't because today's the day they shoot. I really wanted to show Mr. Kim Kap-soo and Mrs. Kim Young-ok me singing so I'm really disappointed. For sure next time though!

Q: You achieved many feats this year including winning best new artist, selling over 100,000 copies of your album and getting to hold a concert. Which are you most happy about?
Dong-woon: I think today. I'm happy about everything else as well but this is something all six of us had dreamt of since we were trainees so it's significant in that we get to hold a concert under our name.
Yoon Doo-joon: It's been slightly over a year since we debuted and everything was a dream to us back then. We worried a lot about whether we'd get to hold a concert and whether people would love our albums but very luckily, they turned out to be pleasant worries. I thank everyone from the bottom of my heart for all the love you have shown us and we'll work harder to repay you for it.
Yo-seop: I'm proud of us in that we released four albums during the past year. Despite the fact that it's been tough physically, I'm most happy about the fact that we got to inform people about the style of music we want to do.
Lee Gi-kwang: I think everything that everyone just mentioned helped to make BEAST become better known.
Hyun-seung: Our concert. Like already said, it's something that all six of us have always dreamt of and we've practiced a lot as well through thorough planning. I don't want to disappoint the audience and I will do my best today.
Jun-hyung: I'm happy about all three but if I had to choose, it's definitely the concert. Up till yesterday, I prepared our show under a huge amount of pressure but that's over now and I'm now happy with the thought that I'l get to put on a fun and amazing show in a few moments.

"BEAST holds first concert - Part 1"
by HanCinema is licensed under a Creative Commons Attribution-Share Alike 3.0 Unported License.
Based on a work from this source