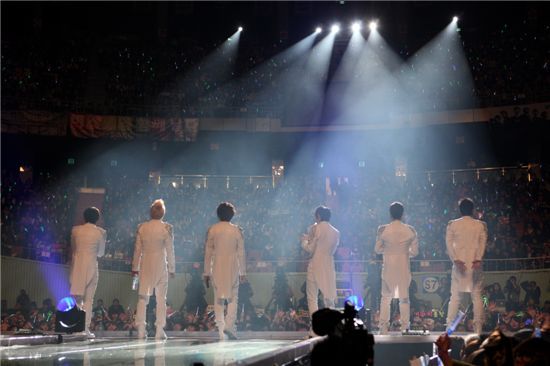 Boy band BEAST performs at their concert "WELCOME TO THE BEAST AIRLINE" held at the Olympic Stadium in Seoul, South Korea on December 12, 2010. [Cube Entertainment]

Q: Is there anyone you talked to or received help from when you were having a hard time while preparing for the concert since you were all very busy?
Yo-seop:
We always talk to each other a lot rather than talk to anyone else in particular.
Yo-seop: The members of our group talk to each other a lot and we were eased of a lot of our worries after talking with our dancing teachers about the concert so I think we tend to talk and resolve things amongst ourselves.

Q: You recently held a successful showcase in Japan. How do you practice your Japanese? And who's Japanese is the best?
Jun-hyung:
We receive lessons whenever we have time and honestly, we're more or less similarly bad at it (laugh) but I guess Dong-woon and Yo-seop could be considered to be relatively good.

Q: Some of you also appear in sitcoms or variety shows. What are the individual activities each of you would like to pursue in the future?
Yo-seop:
We all want to do lots of things but we want to pursue them based on our singing career as members of BEAST. I would like to be a deejay for a radio show and study song writing and composing more. I'm waiting for the opportunity to come to me some day.
Dong-woon: I want to obtain a driving license. For extremely personal activities... (laugh)
Jun-hyung: When I see Yoon Doo-joon and Lee Gi-kwang on sitcoms and variety shows, it seems very difficult so I thank them for doing such a great job. I'm not confident at being better than them yet so I'm thinking it'll naturally come to me one day if I keep working hard at it.
Hyun-seung: There are many ways I could go but I tend not to invest my time into improving myself outside of singing and dancing. I'm usually always practice my singing and dancing when I have time so if I get the chance to, I'd like to release an album as a solo artist who is capable of both skills. But before that, I'd like to work harder as a member of BEAST so that we may receive more love.
Lee Gi-kwang: I made my acting debut thtough MBC's "High Kick Through The Roof" and was given the good opportunity of becoming part of the cast of MBC series "My Princess". Hence fans will get to see me as someone new, not Se-ho nor Lee Gi-kwang. And I'll work harder at my singing career with BEAST so that we'll be able to show new sides to us.
Yoon Doo-joon: I think there's nothing I haven't tried my hand at -- singing, appearing in variety shows, being a radio deejay, acting, etc. I think I'd like to get to work on a larger variety of fields more professionally. I'm not scared of any of them. I'll work hard. Comedian? I'm all for it. (laugh)

Q: What is a strength that BEAST has compared to other boy bands?
Yoon Doo-joon: Even we ourselves think all six of us are very different but we go well together on the stage. We communicate very well too because we're all the same age except for Dong-woon. We might not get to meet our friends from school that often but the members of our group are all each other's best friends and colleagues so I think we have good teamwork.

Q: What's going to be your goal for after holding your concert?
Yoon Doo-joon: We're going to try harder to be loved by the public next year as well. And we'd like to hold concerts often if we could. We would also like to hold concerts in countries overseas as well instead of just showcases. We hope to make ourselves better known to more people.

Q: What does Asia mean to you? And what are your aspirations for the year 2011?
Jun-hyung: After debuting in Korea, I found out that a lot of fans overseas are interested in us as well. We visited them thinking we should repay them for their interest and we will continue to visit them. Whether it be Korea, Japan, Taiwan, or Thailand, I think everyone loves us equally everywhere we go. And I'm hoping that the public will become more familiar with BEAST in 2011. We always say this but we'll work hard to present a new and improved BEAST.

"BEAST holds first concert - Part 2"
by HanCinema is licensed under a Creative Commons Attribution-Share Alike 3.0 Unported License.
Based on a work from this source