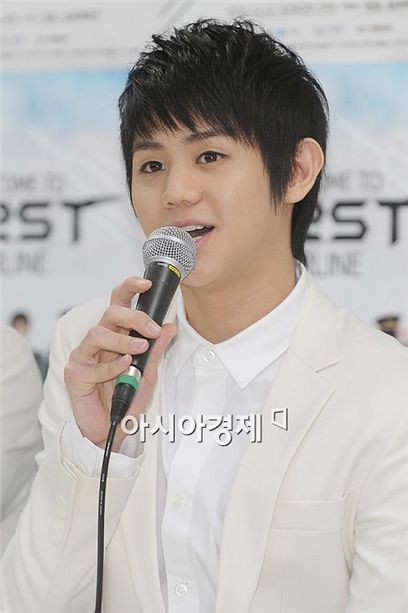 Yo-seop posted a comment on his Twitter (http://twitter.com/helloimys) saying, "It takes time for people to get over thoughtless remarks that others say. It doesn't matter how or who it's done to but it's just not right to hurt someone deeply. You should apologize or should I?"

The 20-year-old singer was referring to the hateful comments that fans wrote about girl group Rainbow member Jae-kyung after news broke that producers of MBC's reality TV "We Got Married" were in talks of selecting a member from BEAST to begin a make-believe marriage with her in place of 2AM's Jo Kwon and Brown Eyed Girls' Ga-in.

Jo Kwon and Ga-in have been regulars on the show since October 2009 but announced earlier this week that they will end their life as a make believe couple on January 15.

Composed of other members Yoon Doo-joon, Hyun-seung, Dong-woon, Lee Gi-kwang and Jun-hyung, BEAST made their debut in October 2009 and have produced hit songs such as "Bad Girl", "Shock" and "Easy".

They have been taking a break from promoting their album since December and are currently preparing for the upcoming encore concert and Japan debut.

"BEAST's Yo-seop asks fans to apologize "
by HanCinema is licensed under a Creative Commons Attribution-Share Alike 3.0 Unported License.
Based on a work from this source