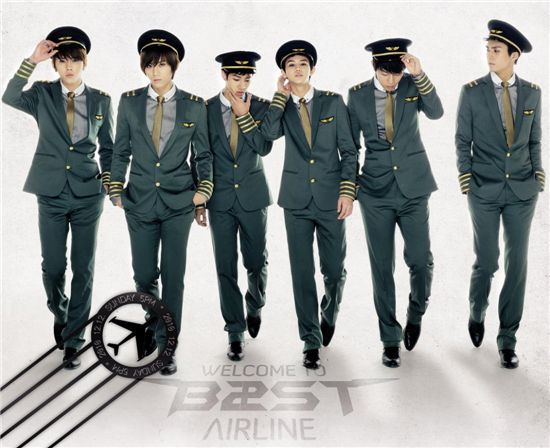 Boy band BEAST will hold a series of encore concerts for the first concert they held in Korea last month, according to the boys' agency Cube Entertainment on Thursday.

Cube announced through a press release today that BEAST will put on two encore concerts at the Gymnastics Stadium of the Olympic Park on February 18 and 19 in response to the heated attention they had received by fans at their December concert.

Last year's show, the boys first-ever concert held December 12, saw all 10,000 tickets sell out shortly after going on sale and fans had requested for an encore concert ever since, Cube said.

The encore show will run under the same theme as the boys' previous concert -- all six members becoming pilots who tour Asia with their fans in line with its title "WELCOME TO BEAST AIRLINE" -- although parts of the stage and props used will be changed and rearranged to enhance the group's performances, Cube explained.

BEAST has been taking a break from promoting their album since December and is currently preparing for the upcoming concert and Japan debut.

Composed of members Yoon Doo-joon, Hyun-seung, Dong-woon, Lee Gi-kwang, Yo-seop and Jun-hyung, BEAST made their debut in October 2009 and have produced hit songs such as "Bad Girl", "Shock" and "Easy".

They made their debut into Japan in last month with their album "BEAST-Japan Premium Edition" which ranked No.6 on the prestigious Oricon daily chart upon its release on November 23.

"BEAST to hold encore concert next month"
by HanCinema is licensed under a Creative Commons Attribution-Share Alike 3.0 Unported License.
Based on a work from this source