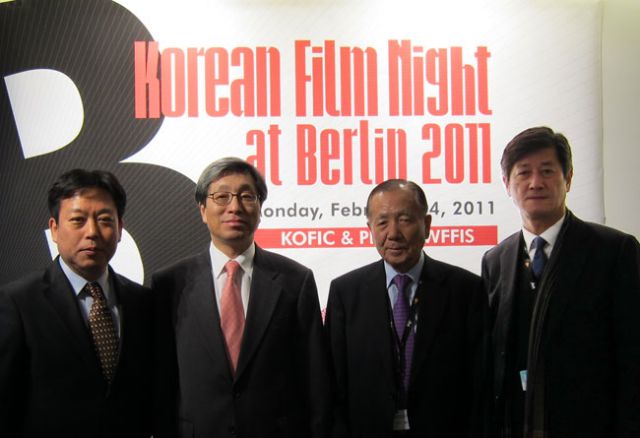 At the 'Korean Film Night' the hosts served Korean food, a sort of the Korean Royal Cuisine and also greeted its guests with a special enthusiasm and wholehearted preparation. Attending directors included Ryoo Seung-wan, who directed "The Unjust", a film which received a great response after being presented in the Panorama section ahead of time, Kim Soo-hyeon, who directed "Life is Peachy", also featured in the Panorama section, Jeon Kyu-hwan of "Dance Town", Kim Gok of "Self-Referential Traverse: zeitgeist and engagement", featured in the Forum section, Kelvin Kyung Kun Park of "Cheonggyecheon Medley: A Dream of Iron", YANG Hyo-joo of "Broken Night", from the Short Film competition section, and Anna LEE of "The Recipe", featured in the 'Culinary Cinema' section. Besides Korean director luminaries, Daniel Gordon, UK director of the documentaries "A State of Mind" and "Crossing the Line", - which centered on the North Korean system and received the attention of movie businesses around the world – graced the occasion with his presence. As well, Christopher Terhechte – Forum Section Head – who selected "Late Autumn - 2010" and three other Korean films for the Forum Section; officials from other important film festivals such as Cannes, Ssitges, Locarno, Mumbai and many film critics and reporters from major film journals around the world attended, completed the mass of guests.

Local interest in Korean films is high as interest poured over the 'Korean Film Night'. It is cautiously expected that director Kelvin Kyung Kun Park of "Cheonggyecheon Medley: A Dream of Iron", which is a highly-rated experimental documentary about the historical Cheonggyecheon, will receive the 'First Feature Film Award' for this, his first full-length film to be featured at a film festival. Also, all four screenings of "Come Rain Come Shine" sold out, proving the passionate responses were not limited or feigned.

At the EFM – held together with the film festival – "Haunters", "Hello Ghost", "The Journals of Musan", and "Poetry" were sold one after another, and 3D-movie "Sector 7" was highly rated for its technical completion even though it is yet to premiere and has been sold overseas in countries such as France, Thailand, Singapore and Malaysia.

Amidst such great interest in the potential award for the movie "Come Rain Come Shine", which was entered the official competition section four years after Park Chan-wook's "I'm a Cyborg, But That's OK" (2007), the 61st Berlin International Film Festival will close on the 20th.

"Berlin "Korean Film Night": Record-breaking number of people attend"
by HanCinema is licensed under a Creative Commons Attribution-Share Alike 3.0 Unported License.
Based on a work from this source