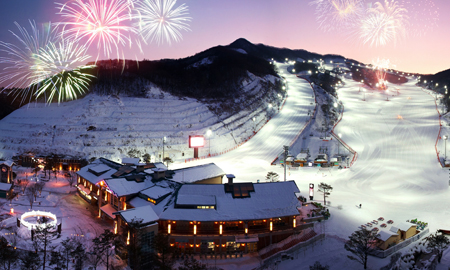 Konjiam Resort in Gwangju, Gyeonggi Province, will celebrate the New Year with firework displays on Dec. 31. / Courtesy of Konjiam Resort

The countdown for 2012 is nearing, but there is still time to decide how to spend the last hours of 2011. Concert halls, theme parks and eateries are offering ways to welcome in the New Year with a little pizzazz.

Every New Year's Eve, thousands of people fill the streets of Jongno, northern Seoul, to hear the ringing of the Boshingak Bell marking the start of another year. However, standing outside in the cold for hours in the crowd to hear the bell is a physically demanding endeavor.

For those looking for a warmer way to greet the New Year, book a window seat at venues near the bell. Many establishments take reservations and will open for extended hours. Some even offer special deals for the night. 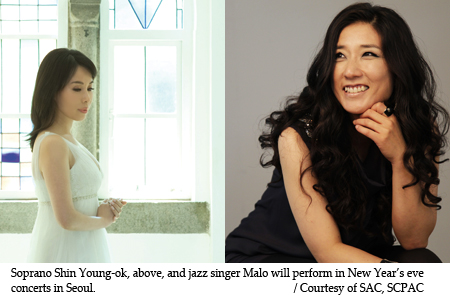 Pizza Hut Jongno branch, located northeast of the bell, is a traditional hotspot for watching the ceremony. The second floor of the pizzeria has floor-to-ceiling window and has 28 tables including eight window tables open for reservations. Special set menus ― pizza, salad, drinks, and pasta ― are offered at a discount starting from 11 p.m.

To book at Daruga, an authentic Indian and Nepalese restaurant, one must rush. Unlike other venues, it has only one table next to a small window available for the special night for a 100,000-won booking fee.

Some venues do not take reservations and give tables on a first-come-first-serve basis. The Ttokssam Age, a barbeque restaurant, is located in the building next to Baekseju Maeul. The restaurant, which takes up the second and the third floors of the building, will not accept reservations for New Year's Eve. Thus, customers can expect an hour or two-hour wait at the door to claim the window seats.

In addition to the sit-down venues, cafes around the block will be open for extended hours to host the crowd. Starbucks Jongno branch will be open until 1 a.m. Jan.1. 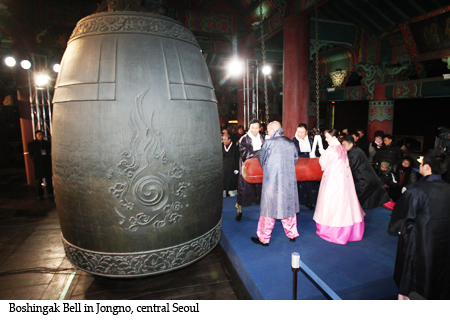 Another great way to celebrate New Year's is with a little music. Seoul Arts Center was the first in the country to offer a late-night New Year's Eve concert, and will present another music-filled evening for the 18th edition of the annual event.

The performance will begin at 9:30 p.m., when curtains close for most shows. Young, up-and-coming conductor Choi Su-yeoul will lead the Gangnam Symphony Orchestra for staples of classical music, jazz, pop, Korean folksongs and film scores.

Lee will present Tchaikovsky's Violin Concerto in D major, Op. 35, while Park will grace the second half of the performance with various numbers. The young vocalist will sing the Irish ballad "Danny Boy", Jo Du-nam's spin on the Korean "gagok" (lyric song) "Baetnorae" and an operatic aria from Verdi's "Macbeth", "Come dal ciel precipita".

Last but not least, Malo, "the queen of scat", will give jazzy treatments to "Besame Mucho", "My Favorite Things" from "The Sound of Music" and the classic Korean pop piece "Lady Camellia". Just before midnight, concertgoers will be invited outside to watch the signature firework display and balloon release. Tickets cost from 33,000 won to 70,000 won. Call (02) 580-1300.

The Sejong Center for the Performing Arts in Seoul will also offer late-night music on Dec. 31. But this year the Center will present the same program twice, at 5 p.m. and 10:30 p.m., to cater to more concertgoers.

The program includes a wide variety of music for family audiences, ranging from operatic arias to musical numbers. Soprano Shin Young-ok will sing seasonal favorites such as "Ave Maria". The prima donna will be joined by popera singer Kai for muchloved duets from "The Phantom of the Opera", while electronic crossover cellist Oh Ah-mi will play instrumental scores from the musical.

All the performers will appear onstage for the big countdown with the audience, watching giant numbers that will be projected on a screen above the stage. Afterward concertgoers will have a chance to write postcards to be delivered a year later in December 2012. Wine will be served during intermission while a lucky few can win special prizes such as plane tickets for Jeju Island and Hong Kong, gift certificates and more.

For those are more outdoor types, theme parks and resorts have prepared a long lineup of events to celebrate the New Year.
Lotte World in southern Seoul will hold "Adieu 2011 Welcome 2012 Countdown Festival" on Dec. 31 at its Garden Stage. A variety of events including a K-pop concert, magic show and b-boy dance performance will grace the amusement park to fete the joyous mood.

The park offers discounts throughout the year as well: a pass for two is 30 percent off and admission for a child under 13 and a guardian is 40 percent off.

Everland in Yongin, Gyeonggi Province, is decorated with the theme of "Winter Wonderland". The winter festivities, which will run through Feb. 29, include a host of outdoor experiences. "Nutcracker Pop-up Adventure" is a fairytale village where children can actually walk into the storybook backdrop and experience the characters.

Avenue, decorated with some 120,000 light bulbs to turn the place into a tunnel of light.

Winter leisure lovers might consider spending the last night of the year at their favorite ski resorts.

At Vivaldi Park Ski World, skiers can enjoy concerts by Ko Yu-jin and Beleive at 11 p.m., Dec. 31 as well as fireworks at midnight.

"Bidding farewell to 2011 "
by HanCinema is licensed under a Creative Commons Attribution-Share Alike 3.0 Unported License.
Based on a work from this source