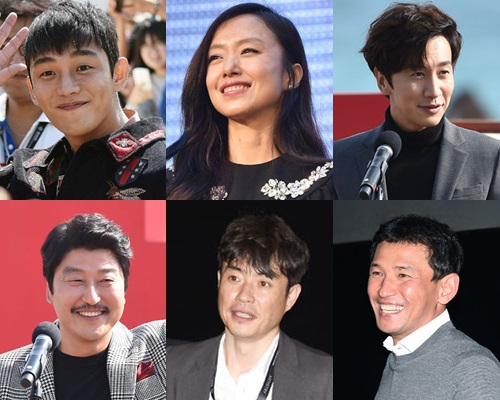 In Busan, stars appear day and night. More and more stars have participated in this year's Busan International Film Festival which celebrates its 20th this year. How exciting, meeting the stars of movies in real life. The stars in Haeundae have been responding to fans' support in various ways.

The opening was hot. The opening ceremony of BIFF was held on the 1st. Although the weather was rough with gale warnings, fans gathered to see their favorite stars.

Yoo Ah-in was the hottest actor at BIFF this year. He led a crowd of fans wherever he went and his stage appearance soon became his exclusive fan meeting. The crowd went wild to see him at the stage appearance of "The Throne" and Song Kang-ho said, "I was here 8 years ago with "The Good, the Bad, the Weird" but I think Yoo Ah-in is more popular than Jung Woo-sung".

Hwang Jung-min, "China? I speak Korean best"
Hwang Jung-min appeared out of nowhere at a public event and was asked about his plans about making a move into China. He said, "I have never been offered anything in China yet. I don't know if they know me but what matters to me is the storyline. It's most important that I can communicate with the public when I act something out. But I speak Korean best so I want to stay here".

Director Ryoo Seung-wan, "Watch "The Throne" and you can see Jo Tae-ho die"
Ryoo Seung-wan also said something. "This is the first time I've seen so many female fans at my movie. This is all thanks to Yoo Ah-in next to me. I liked working with Yoo Ah-in. Those of you who had a problem with Jo Tae-ho should watch "The Throne" because you can watch him die".
Jeon Do-yeon, "If my daughter can't act then I'm going to stop her"
Jeon Do-yeon said, "If my daughter can't act, I will stop her" when she was asked what she would do if her daughter wanted to become an actress as well. If she's not as good as me then I won't let her be one. She's got to do better than Cannes".

Director Lee Byung-hun, "I almost became a traitor because of Kim Woo-bin's injury"
Lee Byung-hun said, Kim Woo-bin got hurt while filming "Twenty". As a director he pretended to be alright about it but he was anxious on the inside. "I felt like I was a traitor to Asia. I almost cried".

Lee Kwang-soo, "I love you Busan. Ni-hao. Xie xie"
The Prince of Asia was also a great hit. He went to Busan with "COLLECTIVE INVENTION" and met his fans. He said, "I love you Busan" and spoke to his Chinese fans, "Ni-hao, Xie xie".