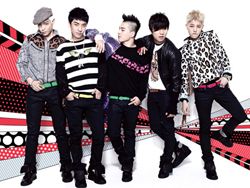 They don't call themselves Big Bang for nothing.

The populary five-membered idol group exploded back onto the music scene with a bang on February 24th. it's been two years and three months since their last official release as a group. The newly released mini-album consists of six songs. All six of which are currently taking up the number one to six spots on all the major online music charts in Korea : Melon Chart, Dosirak, Cyworld, Mnet, Bugs, and Soribada.

On Melon Charts, the group's title track "Tonight" is currently at number one followed by "What Is Right", "Somebody To Love", "Hands Up", "Cafe", and "Intro", respectively. Similarly, "Tonight" is number one on the rest of the previously listed charts, while the two to six spots vary between the remaining five songs. The title song can be described as a new sound from the group's previous works, great lyrics set to emotion-stirring melodies. It's powerful while pulling at one's emotions.

Big Bang's fourth mini-album has been a long time coming, but it seems that fans are happy with the end product. Various responses such as "[The music is] so strong and chic" and "Was worth the wait of two years" are popping up on the internet.