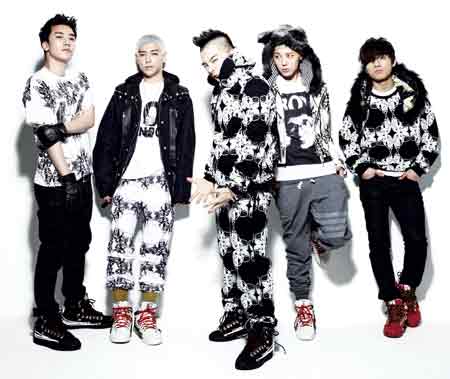 YG Entertainment said the album, which was released in Korea on Feb. 24, is seeing success on its U.S. debut after being listed at No. 7 in the Heatseekers Album Chart for artists that have newly arrived in the top 100 of the Billboard Chart.

Although it has not been listed in major charts such as the Hot 100 and Billboard 200, it is rare for a non-English language album to place in the charts without promotions in the U.S., the agency said.

Big Bang made its comeback last month with a concert titled "2011 Big Show" and its fourth album. The album is sweeping the weekly top spots in the dance genre on the major local charts of online music service providers such as Monkey 3, Melon, Bugs and Soribada. The album became the first K-pop album to reach the top 10 on the U.S. iTunes chart.

Composed of G-Dragon, T.O.P. (Choi Seung-hyun), Taeyang, Daesung and Seungri, the group made its debut in 2006 and has released a number of hit albums and songs. Before their comeback, the members recently pursued independent acting and singing careers among other activities in Japan.

"Big Bang ranks 3rd on Billboard's world album chart"
by HanCinema is licensed under a Creative Commons Attribution-Share Alike 3.0 Unported License.
Based on a work from this source