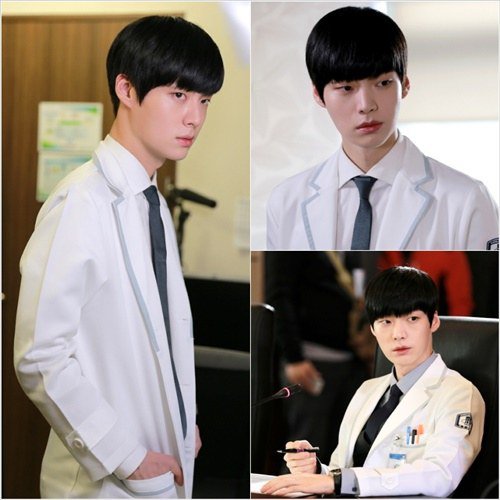 Ahn Jae-hyun plays a mutated vampire who suppresses his desire for blood and treats patients in the KBS 2TV drama "Blood". Park Ji-sang looks selfish, with no feelings for others although he's actually very soft inside and misses many people. His innocent charisma takes over soon.

The white gown he's wearing emphasizes his black hair, white skin and red lips. He is completely Park Ji-sang and also looks rebellious in a way. In the pictures, he looks coldly at something or someone at one point then glares at someone as if he doesn't like what they're doing.

The scene where he reveals the true vampire in himself was taken in a hospital in Seoul. It was the first scene taken in Korea after Romania and Ahn Jae-hyun made sure to go around shaking everyone's hand and introducing himself. He never let go of the script during breaks and discussed many things with the director.

He has put everything else besides the drama on hold and is concentrating on becoming a real doctor. If he doesn't have work on any day, he visits a hospital to observe a surgery in progress or watch medical dramas.

IOK Media says, "Ahn Jae-hyun's outstanding image synchronizes well with Park Ji-sang. This is his first leading role since his debut and he's very eager about it".

Meanwhile, "Blood" is about a vampire who treats terminally ill patients in a cancer hospital produced by Ki Min-soo and written by Park Jae-beom-I.

""Blood" Ahn Jae-hyun, a vampire"
by HanCinema is licensed under a Creative Commons Attribution-Share Alike 3.0 Unported License.
Based on a work from this source