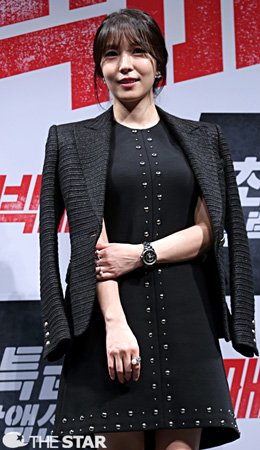 Singer BoA makes her big screen debut in Korea in an action comedy. She previously appeared in the Hollywood movie "Make Your Move".

"Big Match" revolves around a martial arts star who tries to save his brother kidnapped by a villain.

In preparation for the film, BoA went to an action school and practiced boxing with male lead Lee Jung-jae, as she had to perform wild driving scenes.

At a press event for the movie in early November, BoA said she chose the film because she was attracted to her role. "I liked the strong character and wanted to perform stunts. It wasn't an easy decision, but I decided to give it a try".

"Although BoA is known for her flamboyance and girlishness as a famous young singer across Asia, I wanted to show her ordinariness and toughness in the film", the movie's director Choi Ho said.

"BoA Makes Korean Film Debut in Action Flick"
by HanCinema is licensed under a Creative Commons Attribution-Share Alike 3.0 Unported License.
Based on a work from this source