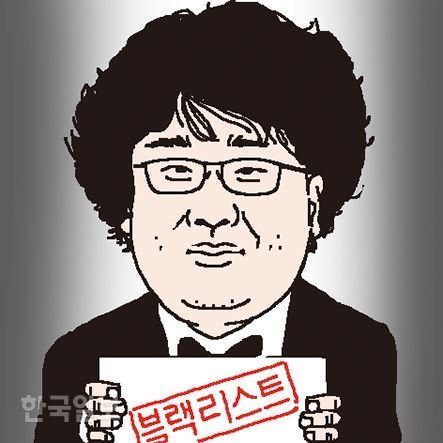 2 years ago when Bong Joon-ho first entered the competition section of the Cannes Film Festival, French news agency AFP once covered his interview from Seoul. The article was titled "From Black List to Blockbuster" and Bong Joon-ho had looked back on the past government saying, "The last few years were a nightmare, as they deeply affected many Korean artists. We knew something was wrong in the film industry somewhere, but we couldn't pinpoint what it was". It was the 'Black List' that was revealed in the process of the impeachment. Bong Joon-ho, who was the head of the Korean Film Directors' Association at that time, was also black listed as a film maker who supported the Sewol investigation.

The Park Geun-hye administration isn't the first time Bong was black listed. According to the survey report by the Committee for the Investigation of the Black List and Institutional Improvement of the Culture and Arts Industry, filmmakers were especially the target of surveillance and exclusion with the Lee Myung-bak administration. Out of 82 people on the NIS' blacklist of cultural artists at the time, 60 were filmmakers including Lee Chang-dong, Park Chan-wook, Moon Sung-geun, Kwon Hae-hyo, Moon So-ri, Kim Gyu-ri, Yu Jun-sang and more. This was the result of a rush to crack down on popular, high-profile films by making documents called "Strategies for Balancing Cultural Power".

In the Black List fact-finding report, there are 15 commercial films appointed by the Lee and Park administrations and their reasons. Some of Bong's works included are "Memories of Murder", "The Host" and "Snowpiercer". Although well-received domestically and abroad, they have been marked with criticism such as 'highlights anti-Americanism and the government's incompetence, and left-leans the peoples' consciousness" ("The Host"), "instills negative perception among the public by portraying civil servants and police as an incompetent corrupt group" ("Memories of Murder"), and ("Snowpiercer") "denies the market economy and encourages a social resistance movement".

Thomas Emerson, a U.S. Yale University professor who is often cited as a scholar who actively stands by freedom of expression, said that if we suppress free discussion, we will cover up the problems facing society and eventually move society in a direction of division, confrontation and destruction. Looking at Bong Joon-ho, who overcame the suppression of the Black List and won the Palme d'Or at the Cannes, reminds us of the fact that the suppression of cultural artists by the previous administration resulted in serious social conflict, which eventually led to the fall of the government, just like Emerson said.

"Bong Joon-ho and the Government Black List "
by HanCinema is licensed under a Creative Commons Attribution-Share Alike 3.0 Unported License.
Based on a work from this source