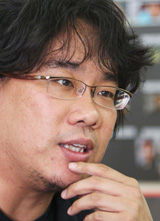 Film director Bong Joon-ho appeared at Chapman University in Orange County, California on Saturday (local time) to give a master class as part of the Busan West Asian Film Festival hosted by the university's Dodge College of Film and Media Arts.

The festival screens a selection of films featured at the Busan International Film Festival that are likely to interest an American audience. Last year, directors Park Chan-wook and Kim Jee-woon were invited.

"Until now, I have focused on films that excite me rather than commercial pictures", Bong told some 150 students. "That's the reason why I was able to spend six months collecting material in preparation, to the extent where I thought I would actually be able to catch the [real] killer when I was making 'Memories of Murder'."

On his blockbuster "The Host", Bong said, "My approach was to break the conventions of Hollywood science-fiction movies. The scenario of having a bunch of losers fight the monster is a good example of this".

"Bong Joon-ho Gives Lecture at Chapman University"
by HanCinema is licensed under a Creative Commons Attribution-Share Alike 3.0 Unported License.
Based on a work from this source