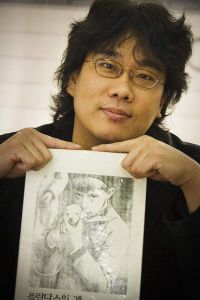 A mother, Hye-ja (played by Kim Hye-ja), gives medicine to her son, Do-jun (played by Won Bin), who urinates in the street. As Do-jun runs away without finishing his medicine, his mother tells him, "Come back soon, don't be late". To this mischievous son, the words "Be back soon" are like meaningless barking, while "Don't be late" sounds like a babble.

According to director Bong Joon-ho's instructions, the former part was said in a way a mother usually speaks to a son while the latter part was said in a way a wife speaks to her husband or lover. Bong said, "Mrs. Kim Hye-ja also found that interesting. To Hye-ja, Do-jun represents everything a man can be in a woman's life  a son, a younger brother, a lover, a friend and a husband".

We met with Bong, the director of "Mother - 2009", after he returned from Cannes on May 21. He was inspired to produce this movie by actress Kim Hye-ja. It's a well-known fact that it took him a while to persuade Kim to take the role. "Mrs. Kim is a people's mother. But I assumed that as honored as she might be to have that title, it might also be huge pressure for her and even be tiresome. So I thought she might like this role", said Bong.

During the movie's screening at the Cannes Film Festival, Bong introduced Kim's role as a "dignified yet wild mother". He said, "When a mother's instinct explodes at moments when she wants to protect her child, like a wild beast that bites and attacks the enemy to rescue its youngster, she becomes oblivious to morality and is unable to distinguish between good and evil. A motherly love is a dignified thing, yet at some point it can become addictive and insane. I believe we can find many instances of that in real life".

So far, Kim has mostly played the role of a caring and loving mother, who can sacrifice herself for the sake of her children. Where did Bong discover the "insane and sensitive part" of herself as a mother? Bong said, "I watched TV a lot as a child. I saw Mrs. Kim often on TV. One of the TV dramas she appeared in was called 'Yeo'. Its viewer ratings were low but I liked it very much. It was ahead of its time and stood apart from other contemporary productions broadcast on terrestrial TV channels. Since childhood I had a penchant for gloomy things, such as crime and detective stories".

Bong added, "Mrs. Kim played a gloomy and hysterical character in that drama--a woman who steals a child because she can't have her own children. Later, I saw her on a talk show and was stunned by her what we call these days 'four-dimensional' personality. I wondered why she never showed that side in dramas".

The director says he didn't simply attempt to transform Mrs. Kim into a functional actress. Bong explained, "In Korea, Kim Hye-ja is a symbol of a mother. Presenting her in a completely new light means tackling the subject of "Mother" from a completely new angle. So I placed an ordinary mother into an extreme situation, namely murder, to see how it goes. It's similar to the role of the father in the movie 'Host'. That's what I like to do".

"Mother - 2009" begins with a scene showing Hye-ja dancing absent-mindedly in a vast field. Bong describes the character as "insane". "This is how this character was originally meant to be from the planning stage. We wanted the movie to begin in an unexpected and bizarre way. I wanted to give viewers many hints about this character", said Bong.

Bong, who received generous praise at the Cannes festival for "Mother - 2009", says he was very nervous at a news conference that was held May 20. He was exhausted by the tight schedule and appeared disinterested in what others said about his movie. But as soon as he arrived home, he looked up news articles about his production. He said, "All directors do that. They cry when people criticize their productions and are happy when they receive rave reviews. I took a look at several reviews that were posted first and luckily they were positive".

Bong said, "I pay special attention to subtitles, but sometimes the original meaning is not conveyed fully in a foreign language. For example, while Korean viewers laugh at what the cute detective says during one scene in the movie, foreign viewers can't sense that. That's why Korean viewers can enjoy the full charm of domestic movies. There is something in them that only we, Koreans, understand".

Bong's next production is "Le Transperceneige" ("Snowpiercer") -- an intense sci-fi movie based on a French cartoon, and it involves director Park Chan-wook. Responding to a question about what a melodrama movie produced by Bong would be like, Bong said, "I like sexy things but I hate 'cool' things. Being 'cool' means staying one step behind. And I like to make things crystal-clear. I think I have to postpone making melodrama movies because I'm not mature enough for them".