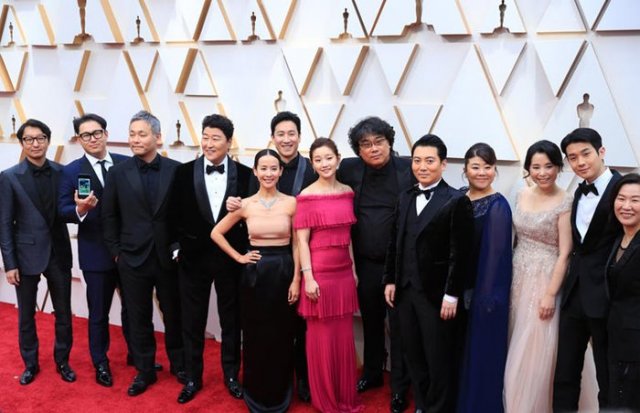 Director Bong Joon-ho (6th right) arrives with cast and crew of "Parasite" on the red carpet of the annual Academy Awards at the Dolby Theatre in Hollywood, California on Sunday. /Xinhua-Yonhap

The film won best picture, best director, best original screenplay and best international feature film, becoming not only the first Korean film ever to win an Oscar but the first film to take both the reserved category for films in a language other than English and best movie overall. 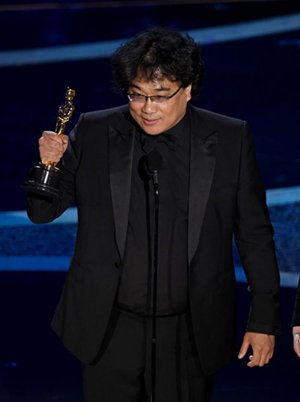 Bong Joon-ho accepts an award for "Parasite" at the annual Academy Awards at the Dolby Theatre in Hollywood, California on Sunday. /AP-Yonhap

In his first acceptance speech in part Korean, part English with the help of his trusty interpreter, Bong said, "Writing a script is such a lonely process, and we never write to represent our country. This is the very first Oscar to [Korea]. Thank you".

The Academy of Motion Picture Arts and Sciences nominated the film in six categories including best picture.

"Parasite" competed with heavyweights Martin Scorsese for "The Irishman", Todd Phillips for "Joker", Sam Mendes for "1917", and Quentin Tarantino for "Once Upon a Time in Hollywood".

Bong thanked both Scorsese and Tarantino for inspiring him while he was studying cinema.

"Parasite" has been on an award-winning spree since receiving the Palme d'Or at the Cannes Film Festival last year.

"Parasite" revolves around two families, one poor and one obscenely rich, whose lives intertwine in tragicomic ways that expose the growing class divisions in Korea and, judging by the global response, the rest of the world.

"Bong Joon-ho Sweeps Oscars with 'Parasite'"
by HanCinema is licensed under a Creative Commons Attribution-Share Alike 3.0 Unported License.
Based on a work from this source