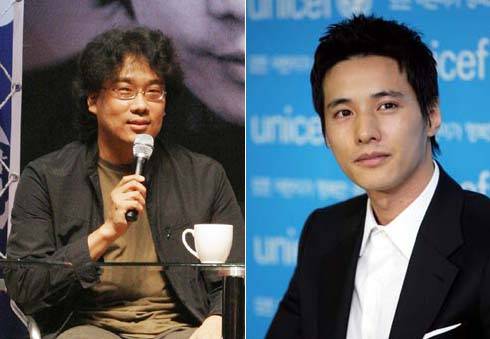 Director Bong Joon-ho of the movie "Mother - 2009" revealed an episode involving the two leading characters. In a meeting with his acquaintances, he said, "Won Bin was far from his image of a refined city-dweller. He is from Kang-won, so I sensed more of a country style".

Before debuting in 1996, Won Bin worked in a auto service center in Kang-won.

Director Bong said, "In the early 1990s, there was a time when I was preparing an independent film with an underground cafe as my hideout. I heard that Kim Hye-ja lived next to the cafe, and I remember staying near the house every morning and evening". He wanted to use fate as an excuse and ask her to star in his independent film.

At that time, Director Bong filmed short films, such as "White Person" and "Incoherence". He wasn't in the condition to divide the labor, so for "Incoherence", he directed, starred, wrote, and edited.

He said, "From my early 20s when I had the dream of making movies, I wanted to work with Byeong Hee-bong and Kim Hye-ja, and that dream has been fulfilled". While filming "Barking Dogs Never Bite" and "Memories of Murder", he approached Kim Hye-ja and asked her to be in his works some day.

"Mother - 2009", starring Kim Hye-ja and Won Bin, is a story of a mother who goes to extremes for her wrongly-accused son. It starts filming this fall, and premieres next year.

"Bong Joon-ho "Won Bin is youthful country style""
by HanCinema is licensed under a Creative Commons Attribution-Share Alike 3.0 Unported License.
Based on a work from this source