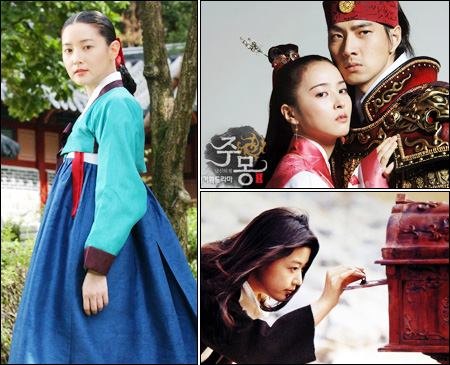 Clockwise from left, scenes from the dramas "Dae Jang Geum" ("Jewel in the Palace") and "Jumong" and the film "Il Mare" / Korea Times file

K-pop fever has been reignited, as illustrated by the success of recent concerts in Paris. Fans that have yet to see Korean performers on stage are forming flash mobs and group dances as they clamor for more K-pop concerts. The popularity of K-pop culture has truly become international.

Korean television dramas, songs and movies originally grew popular in the early 1990s. The influence of "hallyu" or Korean wave, spread through Asian countries and reduced Western cultural dominance in the Asian market.

A newly released book further investigates the worldwide phenomenon of Korean popular culture. Titled "Hallyu: Influence of Korean Popular Culture in Asia and Beyond", the book, edited by Kim Do-kyun and Kim Min-sun and published by Seoul National University Press, delves into the origin of the phenomenon from the past to the present and analyzes the transnational identity of hallyu.

Consisting of 16 chapters, scholars from various fields such as communications, sociology, history and international relations in the United States and Europe. Korea wrote research articles after observing hallyu over the few last years. 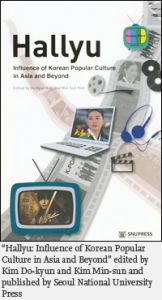 The book has two purposes: the first is to analyze hallyu in various perspectives and the second, to present Korean perspectives on the hallyu phenomenon by providing international readers with analyses by Korean scholars.

In the past, Western popular culture, led by American cultural hegemony, mostly ruled the international landscape. However, recently its transnational mobility across Asia and beyond has produced many socio-cultural and political spinoffs.

Kim Youna, associate professor of global communications at the American University of Paris, explores the reason of the popularity of Korean cultural products, particularly television dramas in the article "Globalization of Korean Media: Meanings and Significance".

Kim sheds light on various perspectives of the popularity of Korean dramas - emotion, reflexive modernity and family. The first common response in various transnational locations is that Korean television dramas are "emotionally powerful". "The audiences enjoy savoring the subtlety of emotions, and K-dramas are perceived to have captured the delicacy of emotions through adept direction techniques", Kim writes in the article.

Korean television dramas are infused with urban middle-class scenes that effectively portray youthful sentimentality and provide images for an increasingly regionalized "Asian modernity". Asian values, which put more emphasis on familial relationships, filial piety and sibling love, are widely dealt with as the central themes which are loved by cross-generational viewers in Asian countries.

As hallyu spreads throughout parts of Southeast Asia, Central Asia, the Middle East, and Latin America, North America is becoming the test market for new exports. In "Medium Hot, Korean Cool: Hallyu Envy and Reverse Mimicry in Contemporary U.S. Pop Culture" by Chung Hye-seung at Oakland University, the author deals with indirect effects of hallyu in the U. S. While Korean movie star, Lee Byung-hun and pan-Asian pop idol, Rain, have appeared in the recent Hollywood blockbusters "G.I. Joe: The Rise of Cobra" (2009) and "Ninja Assassin" (2009) respectively, most hallyu stars are virtually unknown to mainstream American audiences who have limited access to subtitled Korean films and television programs. However, rather than be pessimistic about hallyu not making an entry into mainstream U.S. culture, the chapter examines a "micro invasion" of Korean culture on American primetime television and in mainstream Hollywood films.

"Lost in Cinematic Translation?: The Lake House, "Il Mare" and the Hollywoodization of Korean Culture" written by Bae Keun-min, a Ph.D. candidate at the College of Communications at Pennsylvania State University investigates how Hollywood has been producing its adaptations of "made-in-Korea content". The article analyzes the cultural values reflected in the original Korean film, "Siworae" and the extent to which these values were removed or replaced with American values when it was reborn as "The Lake House",the first-ever Hollywood version of a Korean film.

Sueen Noh, adjunct instructor in the department of broadcasting, telecommunications and mass media of Temple University, discusses the phenomenon of Korean popular culture in the Middle East provoked by Korean dramas such as "Dae Jang Geum" ("Jewel in the Palace") and "Jumong". The article titled "Unveiling the Korean Wave in the Middle East" says that the recent popularity of Korean cultural products in the Middle East such as Iran and Egypt is "reconnecting the Silk Road in the 21st century".
The newest hallyu phenomenon is found in the Middle East, which is geographically much farther from Korea than its predecessors. Korean television dramas reinforce traditional values of Confucianism that Iranians find more closely aligned to Islamic culture, implying that cultural proximity contributes to the Islamic Korean wave.

"Reflecting traditional family values, Korean culture is deemed 'a filter for Western values' in Iran", the article says. The chapter also examines the burgeoning Arabic fandom of Korean popular culture, more specifically, the women's negotiation of their gender and cultural identity in their online community through Facebook.

The articles in the book are academic in general but it is a useful informative tool for those who want to understand the basics and nature of hallyu through various perspectives.