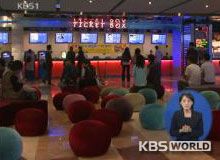 The number of box office tickets sold reached a monthly high for the year in August.

The Korean Film Council said Tuesday that some 19-point-one million movie tickets were purchased in the month of August. The figure broke the previous monthly high of 16-and-a-half million posted in January.

The council added that foreign films accounted for over 58 percent of all the films that were screened.

The domestically produced "The Man From Nowhere", starring Won Bin, was the biggest box office draw with some four-point-six million tickets sold last month. The U.S. films "Inception" and "Salt" finished in second and third place.