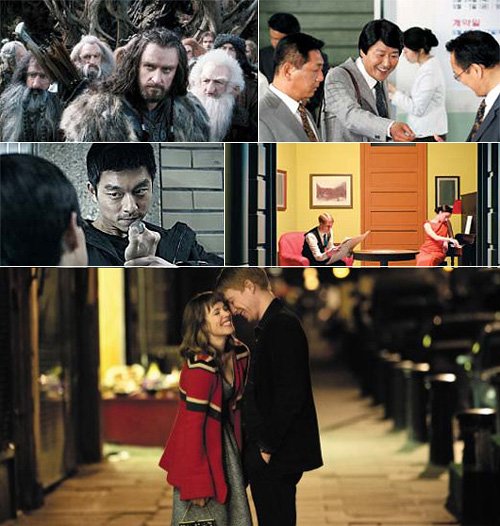 Winter is a great time to head to the cinema due to the number of theatrical releases on offer -- many of them with a festive theme -- and also to escape the cold climes outside. Below is a list of the best on offer at the silver screen over Yuletide, whether it be for a family trip, romantic excursion or just good old escapist fare.

"Way Back Home" is based on the true story of a regular housewife who is arrested in Paris on a charge of attempting to smuggle over 30 kg of cocaine when she mistakenly thought she was carrying gems for a friend. The woman is subsequently imprisoned on a remote Caribbean island, forcing her husband to take action to fight for her freedom.

The second installment of the Hobbit series, "The Hobbit: Desolation of Smaug" is the perfect choice for a boys' night out, especially as it means they won't have to listen to their girlfriends shriek with delight every time Legolas appears on screen.

Other options include "The Suspect", a gritty thriller about an abandoned North Korean spy, and "Escape Plan", featuring action legends Sylvester Stallone and Arnold Schwarzenegger in what amounts to a more muscular version of "Prison Break".

"The Attorney" is a riveting but solemn affair about a civil rights lawyer in the 1980s that stars Song Kang-ho. It marks the directorial debut of web-toon artist Yang Woo-seok. The main protagonist, played by Song, is such a refreshing and attractive character that female viewers may begin to think appearance is no longer important when searching for Mr. Right.

"Shirley: Visions of Reality" is directed by Gustav Deutsch and based on the works of American painter Edward Hopper. The movie follows a woman from the 1930s to 1960s and shows how she hopes to influence history with her involvement in various socio-political movements. Her thoughts and feelings paint a picture of a special era in U.S. history.

Lots of animations are in theaters now targeting children over the holiday period including "The House of Magic", "Saving Santa", "Justin and the Knights of Valour", "Planes", and "Walking with Dinosaurs 3D".

For parents with kids in either middle or high school, "Ender's Game" is highly recommended. This sci-fi flick about a teenage boy who saves mankind from aliens will stimulate the imagination of children. It also stars Harrison Ford and Ben Kingsley to keep the grown-ups happy.

"Box Office Turns Up the Heat Over Christmas with Stocking Full of Treats"
by HanCinema is licensed under a Creative Commons Attribution-Share Alike 3.0 Unported License.
Based on a work from this source