"Bridal Mask" Kimgayo and the 'rising sun', was it necessary? 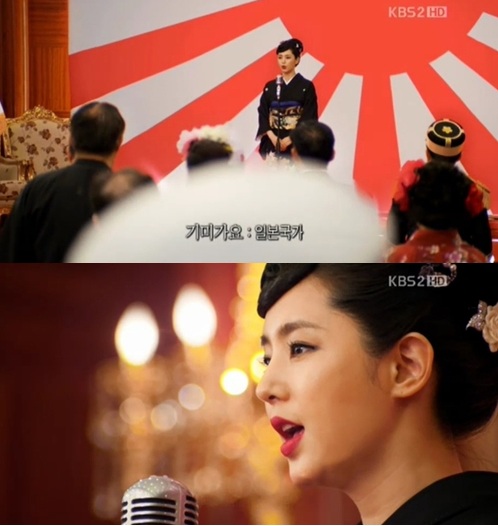 The appearance of Kimigayo and the Japanese rising sun on the KBS 2TV drama "Bridal Mask" is in the heat right now.

There was a scene where Chae Hong-joo (Han Chae-ah) sang a Kimigayo in front of the rising sun in celebration of the Japan-Korea Annexation on the episode on the 11th.

Mok-dam Sa-ri (Jeon Noh-min) planned to start a bomb while Chae Hong-joo was singing but failed when Kimura Shunji (Park Ki-woong) got a hold of it. The appearance of the Bridal Mask ruined the Annexation.

Netizens say, "This is appalling, in public too", "Was it necessary?", "There would've been other ways to do this but this is provoking" and most are very criticizing about this.

Some say, "There probably wasn't another choice if they wanted to go with the flow" and more.

""Bridal Mask" Kimgayo and the 'rising sun', was it necessary?"
by HanCinema is licensed under a Creative Commons Attribution-Share Alike 3.0 Unported License.
Based on a work from this source