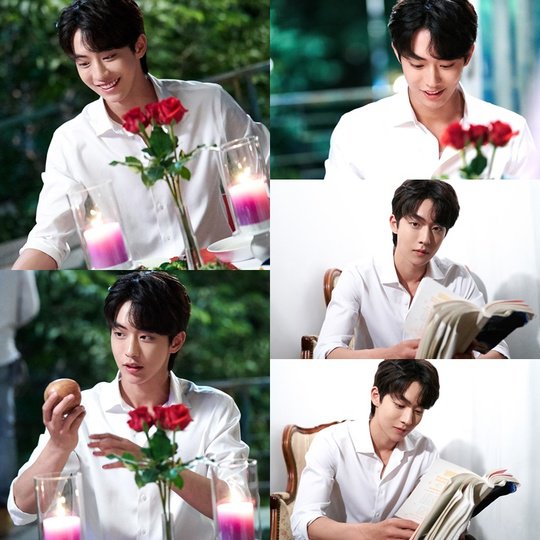 Nam Joo-hyuk is starring in the tvN drama 'Bride of the Water God 2017" as water god Ha Baek.

Ha Baek watched a cooking show on TV and decided to cook on the latest episode of the tvN drama.

He came up with a steak in no time and even cut the steak for So-ah (Shin Se-kyung) himself. He wore a white shirt with his sleeves rolled up and looked like a handsome chef.

The only thing he doesn't have is a sense of humor. He handed So-ah a real apple in terms of 'apology' and asked her strange questions like why she sucked on her nose.

He is all smiles even when he's looking at his script or rehearsing.

Apparently Nam Joo-hyuk is funny and everyone always laughs at his jokes.

He jokes around on set but when the cameras start rolling, he turns serious.

Nam Joo-hyuk has a knack for lame jokes and he doesn't stop coming up with ad-libs behind the camera.

Meanwhile, Moo-ra (Krystal) and Bi Ryeom (Gong Myung) lost the Holy Stone and will Ha Baek get back his powers?

""Bride of the Water God 2017" Nam Joo-hyuk "
by HanCinema is licensed under a Creative Commons Attribution-Share Alike 3.0 Unported License.
Based on a work from this source