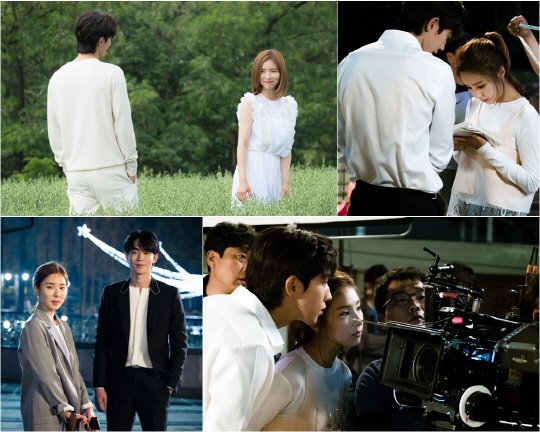 The new tvN drama "Bride of the Water God 2017" released 4 chemistry sets. So-ah and Ha Baek are known as the So Baek couple.

Behind the scene cuts of Shin Se-kyung and Nam Joo-hyuk were posted online.

"Bride of the Water God 2017" is a fantasy drama about a water god who comes down to the human world and a female doctor who pretends to be a realist, but is actually fated to be a servant of the water god.

Shin Se-kyung takes on the role of So-ah and Nam Joo-hyuk is Ha Baek, the water god. Something happens every time they meet. Simply put, the new stills are further raising expectations for this drama.

Shin Se-kyung and Nam Joo-hyuk are discussing something in the pictures and they are monitoring what they just filmed.

The actress and actor have their heads together discussing their lines.

Meanwhile, "Bride of the Water God 2017" is a spinoff version from the original comic. Unlike the original, the drama is modernized and utilizes fantasy and characters to create a new set up. The first episode begins on the 3rd of July at 10:50PM.

""Bride of the Water God 2017" Shin Se-kyung and Nam Joo-hyuk's chemistry "
by HanCinema is licensed under a Creative Commons Attribution-Share Alike 3.0 Unported License.
Based on a work from this source