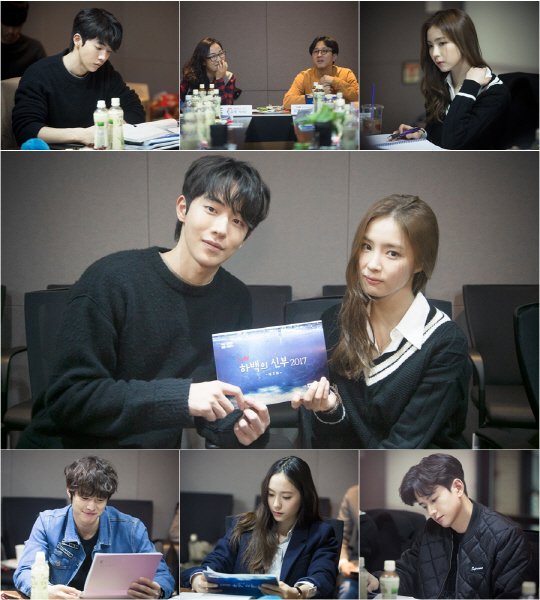 The script reading of the new tvN drama "Bride of the Water God 2017" began.

"Bride of the Water God 2017" is a comedy fantasy romance drama about a man named Ha-baek (Nam Joo-hyuk), a water god who is destined to be a god's slave and a female doctor named So-ah (Shin Se-kyung) who is dramatically realistic.

The line-up is completed by director Kim Byeong-soo and writer Jeong Yoon-jeong.

The director started the reading with a short speech and encouraged everyone to do their best. Writer Jeong Yoon-jeong also said a few words and showed infinite trust in the cast and crew.

The actors and actresses turned into different people as soon as the reading started and Shin Se-kyung seemed to have found her rightful character. Her energy was enough to draw everyone's attention and her chemistry with Nam Joo-hyeok is looked forward to.

Nam Joo-hyuk promised to do his best and his voice changed from situation to situation. He seemed dignified but chic and his expressions and gestures showed just how much he must have studied for the role of Ha-baek.

Lim Ju-hwan, Krystal and Gong Myung all did their best in their roles and defined 'collaboration' at a whole new level.

While the first script reading was a successful one, pictures by Nam Joo-hyuk and Shin Se-kyung are raising expectations for "Bride of the Water God 2017".

""Bride of the Water God 2017" Shin Se-kyung and Nam Joo-hyuk's first script reading "
by HanCinema is licensed under a Creative Commons Attribution-Share Alike 3.0 Unported License.
Based on a work from this source