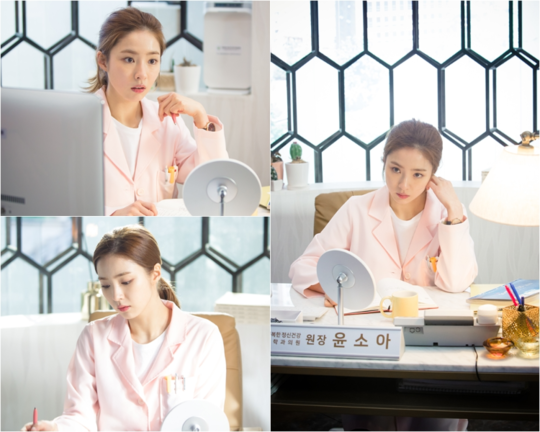 Shin Se-kyung from the new tvN drama "Bride of the Water God 2017" is wearing a doctor's gown.

Shin Se-kyung takes on the role of Yoon So-ah, a psychiatrist.

"Bride of the Water God 2017" is a fantasy drama about a water god named Ha Baek (Nam Joo-hyuk) that comes to live in the human world and a female doctor named So-ah who pretends to be a realist, destined to be a servant of the god.

Shin Se-kyung is the unfortunate Yoon So-ah who is destined to be a servant of the god. She hopes to close down her patient-less hospital as quickly as possible but her good-nature keeps her from avoiding trouble.

She thinks of water god Ha Baek as 'delusional' but slowly falls for him.

Shin Se-kyung is wearing a comfortable T-shirt with her hair tied back with a gown on top. She looks prepared to be at anyone's side when they need her. As this is the first time Shin Se-kyung is playing the role of a doctor, she made sure of every detail to become Yoon So-ah.

""Bride of the Water God 2017" Shin Se-kyung wearing doctor's gown "
by HanCinema is licensed under a Creative Commons Attribution-Share Alike 3.0 Unported License.
Based on a work from this source