Britain's The Times  'Poet of Blood' Park Chan-wook has changed 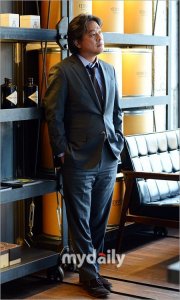 The British press is focusing on Director Park Chan-wook, who is awaiting the British premiere of "I'm a Cyborg, But That's OK" on the 4th.

Britain's daily magazine The Times stated through an interview with Director Park that the "poet of blood has changed his productions to love stories".

"I'm a Cyborg, But That's OK" is about two mental hospital patients, played by Rain and Im Soo-jung. It seems The Times has called Director Park the 'poet of blood' because of his bloody revenge stories, "Sympathy for Mr. Vengeance", "Old Boy", and "Sympathy for Lady Vengeance".

In the article, The Times stated, "Director Park's "Old Boy" was at the center of attention after Cho Seung-hui, who committed the Virginia Tech killings, sent a picture of him holding a hammer to a television station".

Director Park commented, "When I heard the news, I was very shocked. I was sad when the press compared that picture and the "Old Boy" poster (Choi Min-sik holding a hammer), as if they were related somehow".

The Times judged, "Director Park must be relieved that "I'm a Cyborg, But That's OK", which was filmed before the Virgina Tech incident, portrays a different viewpoint. This is very different from his previous works".

They continued, "Director Park made this with his 14-year-old daughter in mind", reminding us that his previous movies were rated for 18-years-old and over. However, they said, "There is a scene when the female character (Im Soo-jung) shoots the hospital workers".

It will begin playing in northern London's East Finchley Phoenix Theater and Liverpool Picture House on the 11th, Edinburgh Film House and Poole Art Center on the 25th. It will be screened at the Belfast Film Festival, starting on the 11th.

"Britain's The Times  'Poet of Blood' Park Chan-wook has changed"
by HanCinema is licensed under a Creative Commons Attribution-Share Alike 3.0 Unported License.
Based on a work from this source