British blown away by performance from K-pop group SHINee 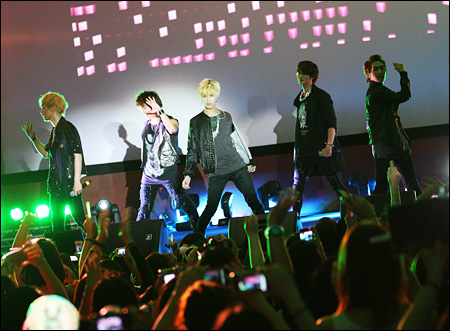 SHINee in London: SHINee members, from left, Key, 20, Jonghyun, 20, Taemin, 18, Choi Minho, 19, and Onew, 21, perform at the Odeon Leicester Square in London, Thursday. The show opened the Sixth London Korean Film Festival as the opening gala concert. SHINee sang its hit tracks in front of British fans. Tickets for the concert sold out faster than those for the Harry Potter movie series, causing the ticketing website's server to shut down one minute after sales started, the Odeon Theater said. (Picture courtesy of SM Entertainment)

"I Love SHINee" and "I'll even wait outside just to see your faces".

The popular K-pop male group SHINee has successfully finished its performance in line with the opening of the sixth London Korean Film Festival, receiving a standing ovation from British fans.

A large audience of local fans were fascinated with the performance of the male idols at the Odeon West End Cinema Thursday afternoon.

Local fans, who started to enter the cinema early afternoon, were waiting for the five members of SHINee to appear on the stage. Those without tickets were wandering around the theater to see the Korean idols far away, waiting in the rain.

The fans, most of them teens or in their 20s, swarmed there upon finishing school, holding signs reading "SHINee, I love you" in both Korean and English.

More than 800 fans in the theater snapped away pictures on their cameras and phones to catch every image of their performance.

The fans sang along with the musicians in Korean, copying every move, and becoming one with SHINee.?
SHINee sang some 10 songs, such as "Ring Ding Dong", "Juliette", "LUCIFER", "Tik Tok", and "Replay".

"It's fantastic. I'm fascinated to see SHINee in person", said Aisha, 16, with tears in her eyes after watching the performance.

"This whole time I'd only seen them in videos, so it's a great feeling to see them singing and dancing live", said another teenage girl, Yasmin, 15. "Wherever SHINee goes, I'll go".

"Fans seemed to love our enthusiasm", SHINee told reporters after finishing their performance. "It will be a great honor for us to make K-pop widely known in many countries, including Britain".

Local newspapers, including the Independent and the Guardian, showed their keen interest in the the K-pop group, interviewing SHINee when the performance was finished.

SHINee members entered the theater via emergency staircases in fear of accidents from probable rushing of local fans to the male group when they went through the main entrance.

The fever was also apparent in ticket sales. The reservation system froze for five hours on Oct. 27 when large number of fans flooded the Odeon system simultaneously. The tickets were also sold 5-6 times the original prices of 20-30 pounds on eBay.

SHINee led K-pop fever from fans, who welcomed the group during their first performance last June at the Abby Road Studios, which is where they also recorded their album.

"War of the Arrows", produced by film director Kim Han-min, was screened at the Odeon West End Cinema, following the opening performance by the K-pop group. The film has been a blockbuster in Korea, attracting as many as 7.4 million movie-goers since its release on Aug. 11.

Director Kim answered questions in a session presided over by East Asian film commentator, Tony Rayns, on stage after the screening.

More than 30 films will be screened in the four British cities of London, Sheffield, Cambridge and New Castle for three weeks until Nov. 24 at the sixth London Korean Film Festival. (Yonhap)

"British blown away by performance from K-pop group SHINee"
by HanCinema is licensed under a Creative Commons Attribution-Share Alike 3.0 Unported License.
Based on a work from this source