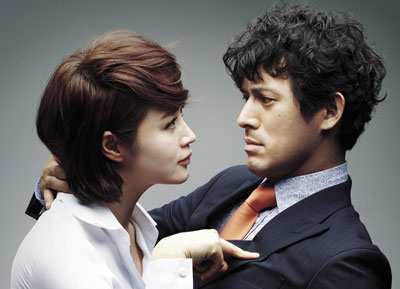 Now it's a war on Mondays and Tuesdays. The three dramas on show at the moment are about to come to an end at similar times and April is coming along. We take a look at the three upcoming dramas.

"The Queen of Office"

Kim Hye-soo is coming back for the first time in 3 months with KBS 2TV drama "The Queen of Office". There are high expectations on this drama as the current "Ad Genius Lee Tae-baek" on KBS 2TV is very low on the percentage of 3~4%.

A popular original is a positive element. The original is Japanese NTV "Multitasking Oomae" (2007) which record high percentages at the time of show. The concept of a contracted employee who has to suck up to his superior is also one thing that draws attention.

The original doesn't guarantee the success of the drama. It's important to maintain the fun of the original's but make it so that it will relate to the Korean viewers. An example of a successful SBS drama is "That Winter, the Wind Blows" which is based on the Japanese TBC, "No Need For Love". It's a remake but the original actually failed to succeed in 2002.

MBC drama "Gu Family Book" continues the fantasy drama fever that's been going on in MBC since last year. Choi Kang-chi, a half man half east, struggles to become human. Gu Family Book means a secret message that is sent throughout the gumiho clan. The interesting setting is fresh like never seen before.

Lee Seung-gi plays Choi Kang-chi and Bae Suzy is the talented martial arts master Dam Yeo-wool. They are acknowledged actor and actress. They also share in common that their previous drams weren't all that successful. They need a rebound.

MBC drama "Arang and the Magistrate" was about a magistrate and a ghost. The freshness in the beginning didn't last long. The ability to lead the story along didn't live up to the brilliance of the idea. "Gu Family Book" also needs to focus on the originality of the drama and not otherwise.

Kim Tae-hee becomes Jang Hee-bin in SBS drama "Jang Ok-jeong". The steal cut reveals at how fancy it's going to turn out. Kim Tae-hee's picture of the purple Hanbok was the most looked up thing on the Net all day.

Concubine born Jang Ok-jeong (Jang Hee-bin) rose to the position of a queen. She is a character with extreme elements. That is one reason why Kim Ji-mi, Nam Jeong-im, Youn Yuh-jung, Lee Mi-sook, Jeon In-hwa, Jung Sun-kyung, Kim Hye-soo and Lee So-yeon have been loved for this character. "Jang Ok-jeong" is re-highlighted as a fashion designer in the Chosun times.

Fiction historicals add ideas to existing characters and create a fuller imagination. In the process will follow issues about history distortion. Known as the evil of the century, Jang Ok-jeong's will be one who is obedient to love and Sook-bin (Han Seung-yeon) who has always been the good one, will become the bad. They could bring confusion to everyone and therefore, Kim Tae-hee and Han Seung-yeon need verification. 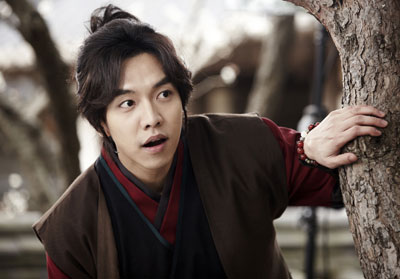 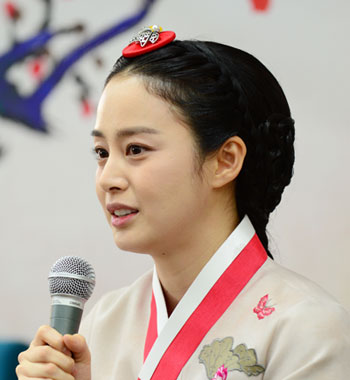 "[Broadcast] Dramas in April"
by HanCinema is licensed under a Creative Commons Attribution-Share Alike 3.0 Unported License.
Based on a work from this source