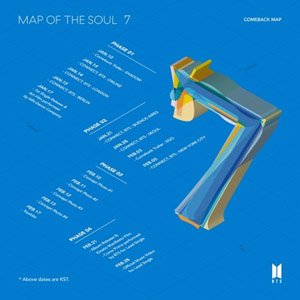 BTS will release a new album next month.

Their agency Big Hit Entertainment on Thursday said the album, titled "Map of the Soul: 7", will be released globally on Feb. 21, with pre-orders starting Thursday.

The new album comes 10 months since the release of "Map of the Soul: Persona", which sold almost 3.7 million copies and hit No. 1 on the Billboard 200 Albums Chart.

"BTS to Release New Album Next Month"
by HanCinema is licensed under a Creative Commons Attribution-Share Alike 3.0 Unported License.
Based on a work from this source