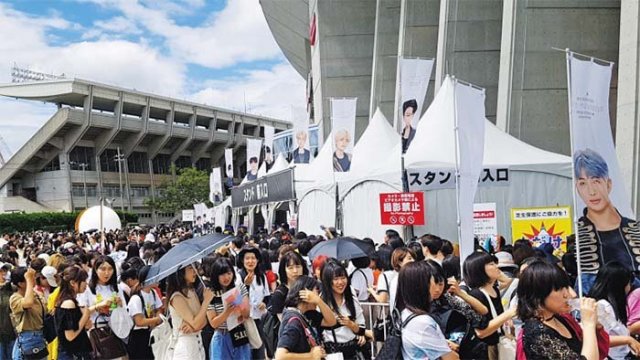 Fans queue for a BTS concert in Osaka, Japan on Saturday. /Yonhap

Boy superband BTS' concert on Saturday in Osaka was packed to its 50,000 capacity despite growing political tensions between Korea and Japan.

The fans of the boys, also known as BTS, queued up for hours to buy merchandise at the Yanmar Stadium Nagai and were excited to take pictures with life-sized cutouts of their idols.

The next concert on Sunday at the same venue was also sold out.

Japanese fans of BTS expressed hope that the squabbling neighbors can be friends, and the crowd sang along in Korean from start to finish.

BTS also shot to the top of Japan's Oricon singles chart with "Lights/Boys with Luv" as soon as their 10th single album was released there last Wednesday.

The new album has three tracks -- brand-new song "Lights" and Japanese versions of "Boy with Luv" and " Idol ". Their last single in Japan was "Fake Love/Airplane pt. 2" released in November last year.

Next up are two concerts in Fukuroi, Shizuoka on July 13 and 14. The venue there has a capacity of 51,000 and both concerts are already sold out.

"BTS Triumph in Japan Despite Political Tensions"
by HanCinema is licensed under a Creative Commons Attribution-Share Alike 3.0 Unported License.
Based on a work from this source