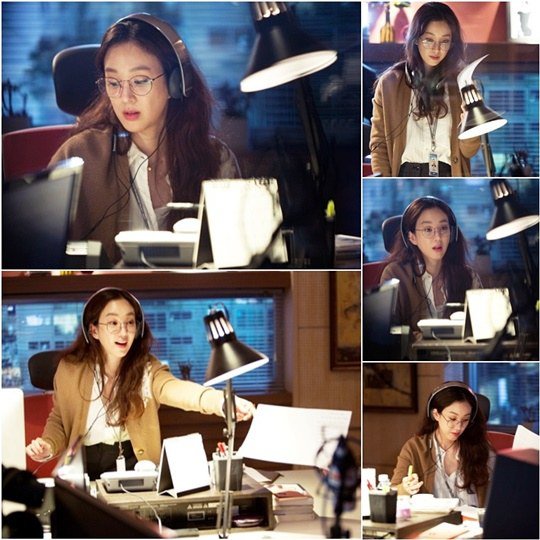 Jung Ryeo-won plays Kim Heng-ah, also known as the Happy Candy who doesn't get let down no matter how lonely and sad she is. She has been a radio producer for 8 years and grew up with Lee Dong-wook as good friends since they were young.

Pictures of Jung Ryeo-won as a radio producer have been released. She has messy hair and is wearing glasses but they're not enough to hide her natural beauty. She looks busy looking through the script and checking the equipment. She is concentrating hard in her work with headphones on and she also looks like she's deep in thought about something. She looks like a pro.

This scene was taken on the 15th. Jung Ryeo-won arrived on the set early in the morning and brought her energy with her. She was also amazed at the set that is the radio booth as it seemed so real. When the camera started rolling, she became the radio producer and did an excellent job.

This is the first time she's playing a radio PD since her debut so she's putting in much effort into it. Jung Ryeo-won usually likes to play her music according to her mood that they and she applied this to her producer role. She also visited a real radio station and asked for advice on being a producer.

Meanwhile, "Bubble Gum" is the reunion of Lee Dong-wook and Jung Ryeo-won for the first time in 12 years and the first episode starts on the 26th at 11PM.

""Bubble Gum" Jung Ryeo-won in the radio booth as a DJ"
by HanCinema is licensed under a Creative Commons Attribution-Share Alike 3.0 Unported License.
Based on a work from this source