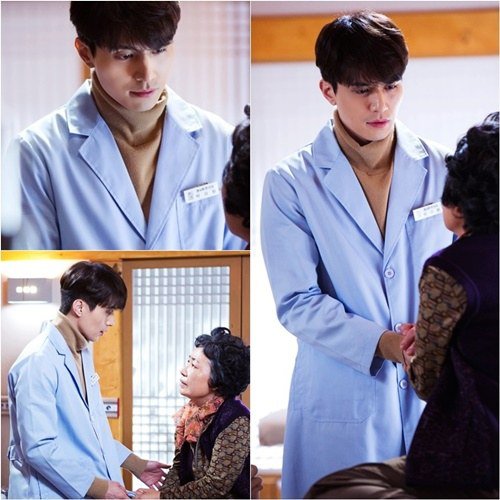 Lee Dong-wook became a Chinese medicine doctor who doesn't only treat illnesses but the patients' minds too.

He plays Park Ri-han, a handsome, skilled, and considerate Chinese medicine doctor. The original romantic comedy king is being highly anticipated for his role in the new tvN drama "Bubble Gum".

In the picture of him wearing a light blue gown and holding the hands of an elderly woman, he looks like he's listening carefully to what the patient has to say. He looks dandy in the gown.

This scene was taken at the set of "Bubble Gum" on the 13th. He's known to be considerate of the others on the set as he greets the staff and crew members first when he gets to work and starts minimal talk with them.

In addition, while the set is being fixed, Lee Dong-wook memorizes his lines and prepares for the next scene. He uses the time used while he's being prepped to go over his lines with the supporting actress which is the elderly woman and gives up his private time to rehearse with others as well.

The crew says he is doing a good job in bringing out the character of Park Ri-hwan.

Meanwhile, "Bubble Gum" is the romantic story of a man and a woman who grew up together starring Lee Dong-wook, Jung Ryeo-won, Lee Jong-hyuk, Park Hee-bon, Kim Jung-nan, Park Joon-geum, Park Won-sang and Lee Seung-joon. The drama starts on the 26th. At 11PM.

""Bubble Gum" Lee Dong-wook, so caring"
by HanCinema is licensed under a Creative Commons Attribution-Share Alike 3.0 Unported License.
Based on a work from this source