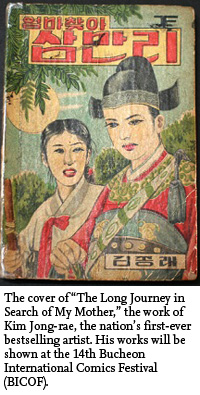 The 14th Bucheon International Comics Festival (BICOF) starts Wednesday under the concept, "Smartoon", a combination of the words of "smart" and "cartoon", at the Korea Manhwa Museum and Bucheon Media and Culture Complex through Aug. 21.

This year's festival highlights the potential and wide range of comics in the digital era and introduces foreign works of digital comics.
The event explores the past, present and future of Korean digital comics.

In the "Hyung Min-woo and Priest" section, prominent cartoonist Hyung's illustrations and sketches will be on display. Renowned for his representative comic series "Priest", Hyung is one of the most acclaimed Korean artists in the comics and graphic novel genre. In this section, an interview video with Hyung and original character figurines from "Priest" and the process of making the character figurines will be demonstrated.

The "Digital Restoration of the Ninth Myth" section is a meaningful project that presents the digitally restored issues of the comic magazine "The Ninth Myth" (1985-87) published by nine cartoonists including Kim Jin-I, Kim Hye-rin, Shin Il-sook, Lee Jung-ae, Lee Seung-hee-I, Hwang Mi-na and others. The magazine was a predecessor of the publication of "Renaissance" in 1988.
In the "Present Conditions of Korean Digital Comics" section, the works by Korea's representative Web cartoonists such as Kang Full, Kang Do-ha, Yoon Tae-ho and Ha Il-kwon will be exhibited.

A work by Scott Macleod, one of the pioneers of online comics will be featured at the 14th Bucheon International Comics Festival (BICOF) that starts Wednesday. / Courtesy of BICOF

The "Digital Comics Technique" section is an introduction by leading U.S. online cartoon firm ComiXology of innovative online viewer technology. CEO David Timothy Steinberger of ComiXology will give a speech on Aug. 18 about the strategy of the comics industry in the era of smart media. The company transitioned comic books to the iPad and other tablets and has dominated Apple's top grossing apps list in the book category for the past couple of months.

Milton Griepp, CEO of ICv2, will overview the U.S. comic industry's digital situation, while Ferreyrolle Catherine, director of CIBDI, will present the operation strategy of the comic archives to adapt to technological environment.

Along with the themed exhibition, 11 other exhibitions including the late Kim Jong-rae exhibition, the Park Hee-jung exhibition and the commemoration exhibition of Huh Young-man will be held. Kim, the first-ever bestselling artist renowned for "The Long Journey in Search of My Mother", created comics shadowed with poverty and sad characters, reflecting the Korean pathos and sentiments of the 1950s and 1960s. During the period, Kim (1927-2001) produced numerous works based on traditional values. Born in Japan, Kim moved to Korea in 1946 and created "The Story of Park Mun-su" and built his reputation as one of the best dramatic comic artists with "The Horizon of Tears". Kim's family donated 474 volumes of his comic books to the Korea Manhwa Museum in 2010 and part of the donations will be exhibited during the festival.

Also, a digital fair that showcases the distribution structure of Web comics and BPP (BICOF Promotion Plan) that is intended to open the door for more active investment in comics content are to be presented.

"Bucheon comic fair enters digital era "
by HanCinema is licensed under a Creative Commons Attribution-Share Alike 3.0 Unported License.
Based on a work from this source