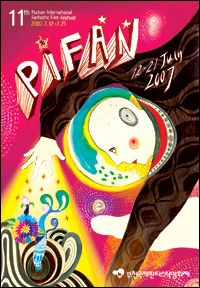 Escape the oppressive monsoon season by diving into the fantastic world of cinema at the 11th Puchon (Bucheon) International Fantastic Film Festival (PiFan). Celebrating non-mainstream films since 1997, the city west of Seoul will screen 215 innovative works from 33 different countries, July 12-21.

Ranging from heartfelt drama and slapstick comedy to skin-crawling horror and zany science fiction, these films fully explore the flight of the human imagination.

"For Eternal Hearts" (2007) by Hwang Kyoo-deok will inaugurate the opening event next Thursday evening. The film tells in retrospect the love story of Su-young, a professor in his 40s. Looking back to his timid love back in college, Su-young's recollection is a blurred mix of the real and the surreal.

Ten films from all over the world are lined up for the festival's main competition, Puchon (Bucheon) Choice. Fans can also see over 100 short films created by domestic and international talent, a reflection of the thriving low-budget independent production in Korea.

Outside of the competition, World Fantastic Cinema includes films from different corners of the world, from Sweden to New Zealand to the Philippines.

The festival shines a spotlight on the Joseph Conrad-ian notion of man's "fascination of the abomination". Forbidden Zone showcases films that explore social taboos such as sadomasochistic sexual relationships ("Bakushi", 2007). A special tribute to Herman Yau, hailed by cult film fans as "the king of horror", includes works with provocative plots like a restaurant serving Ebola-infected human meat dumplings ("The Untold Story", 1993). These films are for those over 18 years and with a strong stomach.

Gore is not the only genre the festival offers. Parents and children can enjoy heartwarming movies in the Family and Animation sections. "The Yakiniku Movie: Bulgogi" (2007) topped online ticket reservations for the festival. Japanese-born Korean filmmaker Gu Su-yeon, known in Japan as a genius of directing TV commercials, hilariously depicts the fierce battle between two brothers in a TV cooking program.

Retrospective specials celebrate Monte Hellman, the father of "second rate" American science fiction films from the 1960s-70s; Italian horror master Dario Argento; Lee Bong-rae, who was at the helm of blossoming Korean film industry in the 1950s-60s; and classic filmmaker Richard Fleischer ("20,000 Leagues Under the Sea", 1954).

In addition to unique films, fun events like "Fantastic Class", a workshop for aspiring filmmakers and students to learn about special effect make-up in Asian films, will be held. Experts from Hong Kong, Japan and Korea will participate, including the makers of the looks of "Sympathy for Lady Vengeance" (2005) and "The Host" (2006), as well as Michelle Wong, who was in charge of faces like Jackie Chan and Chow Yun Fat.

For more information about the festival, visit www.pifan.com. Online ticket reservations are available through July 20 at Open the link.

"Bucheon Film Festival Fathoms Fantasies"
by HanCinema is licensed under a Creative Commons Attribution-Share Alike 3.0 Unported License.
Based on a work from this source