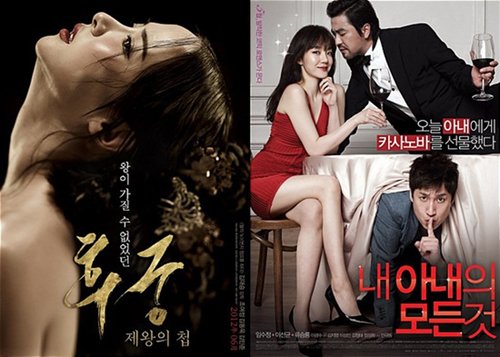 The Korean film industry is enjoying a boom this year with the total number of viewers until Tuesday at 41.93 million, up over 10 million from the same period last year. And Korean films attracted more moviegoers than Hollywood blockbusters and other foreign films, accounting for 53.5 percent of the total number.

One reason is the popularity of films that appeal to adult audiences. Some 13 Korean films drew over 1 million moviegoers this year, and five of them were rated R.

"Nameless Gangster" was the hottest movie in the first half of this year. It won over critics and audiences with its credible yet entertaining plot and vivid characterizations of criminal elements in Korea's most attractive coastal city of Busan.

"The Concubine" topped the box office as of Wednesday as it has become the talk of the town with steamy sex scenes. "A Muse", "The Scent" and "The Taste of Money" also drew much attention with racy scenes.

Industry insiders say the trend is unusual since it excludes a whole segment of enthusiastic moviegoers under 19.

Another remarkable trend is that people in their 30s led the boom. According to Max Movie, moviegoers in the age group accounted for the majority of viewers of the five adult-rated films. They helped Korean films hold their own against Hollywood blockbuster like "Avengers" and "Men in Black 3".

Viewers in their 20s generally prefer more anodyne date movies, Max Movie said, so adult-rated movies appeal to people in their 30s or over, especially women who go to the theatre in groups.

Thirty-somethings made up the largest share of viewers for all movies that hit the 1 million mark this year, except the kids' film "Speckles: The Tarbosaurus".

The reason is that those in their 30s have grown up with Korean pop culture, which started to prosper in the 1990s, and now have significant purchasing power. The film industry realized that and made movies targeting them.

"The film industry has usually targeted those in their teens and 20s, but that seems to be changing", said film critic Jeon Chan-il. "An increasing number of movies will aim to lure viewers in their 30s and that will also affect actors who appear in them".

"Bumper Year for Adult-Oriented Korean Movies"
by HanCinema is licensed under a Creative Commons Attribution-Share Alike 3.0 Unported License.
Based on a work from this source