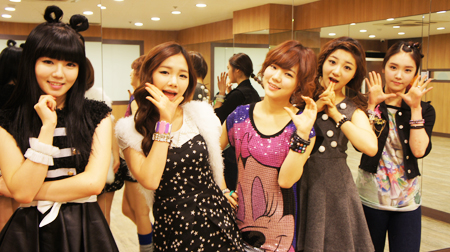 Stepping into the K-pop scene dominated by big names like Girls' Generation and 2NE1 would be a tough decision for anyone. But five members of bubbly girl group C-REAL, Chemi, Re Dee, Effie, Ann J and Lenny, make it sound so matter-of-fact.

"I always knew I would become a singer, I actually don't know what I would be doing if I hadn't", Chemi, the leader of the group who has just turned 20, told The Korea Times in Gangnam, southern Seoul, Thursday. Even the youngest member, Lenny, 15, who just graduated from junior high school describes her decision as inevitable. "I always loved to sing, I always wanted to be a singer performing on a stage".

C-REAL made its debut in October 2011 with "Round 1", an album with six tracks produced by the industry's hit makers like Sinsa Dong Tiger and Brave Brothers. Sinsa Dong Tiger is the in-demand producer behind girl groups T-ara and Four Minute, and the boy-band BEAST. For C-REAL's album, Sinsa Dong Tiger wrote "Please Don't Do This", a track that harmonizes electronic beats with emotional lyrics, and the Brave Brothers produced title track, "No No No No", an addictive song that emphasizes the freshness of the teen group. 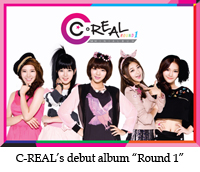 The girls laughed as they recalled their first appearance at Mnet's "M Countdown". Re Dee, the group's rapper said, "We couldn't register anything that was happening ― we were too nervous". "But now we are at a point where we can see people's faces", added 17-year-old Effie.

Once their dream of singing in front of an audience came true, their journey proved a difficult one. They rehearse over 12 hours a day, not only for dance and vocal training but also acting lessons to enhance their performances. Their popularity is still questionable as they are able to walk along the street without being recognized.

The dream also came at a price. Chemi will not be enrolling in any universities this year. "I am reconsidering whether it is necessary to go to college". Ann J, 16, dropped out of high school to focus on singing. "I know it caused some people to talk. It is the first thing that comes up if you search my name online but I don't regret my decision". The members who are in high school plan on continuing their studies for now but that could change.

The girls also live together, like many Korean idol groups. These trade-offs are critical. The girls said they miss out on crucial parts of the socialization process that their peers experience. "When we are in the car, we get so envious when we see school girls in their uniforms", Chemi confessed.

The group sees room for improvement in their performances. They arrived on the scene after only a year of training which is relatively short compared to other K-pop groups who often stay as trainees for more than two years. "When we see artists like Girls Generation on stage, we are just in awe. They are so confident and they look like they are enjoying it", said Chemi.

The girls' parents were fully supportive of their pursuit, which reflects the change in how society sees a career as an entertainer. Chemi said her parents always wanted her to become a singer.

When asked what their goals are ― other than becoming one of the most famous girl groups in Korea ― they poured out their hearts. "I want us to be invited to perform at the end-of-the-year award ceremonies", said Chemi. Ann J added, "I want to shoot advertisements".

They are currently wrapping up their first album and will start recording a second one soon. For now, they are focusing on appealing to fans through the cuteness of their songs but eventually all members want to sing R&B tracks.

"C-REAL takes over world of girl groups"
by HanCinema is licensed under a Creative Commons Attribution-Share Alike 3.0 Unported License.
Based on a work from this source