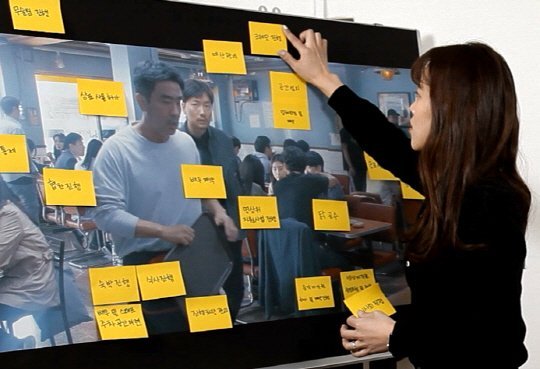 CJ ENM revealed that the video on has ccumulated 80,000 hits since it began airing last August. This campaign was designed to introduce the roles and hard work of the staff members, whose names are credited at the end of the movies. A total of four campaign videos have been produced so far, which can be viewed through cable TV movie channels such as Channel CGV, OCN, Super Action, and CJ Entertainment Facebook. Starting with the "1987: When the Day Comes" costume team leader, the second revealed "The Spy Gone North" art team leader, the third "The Accidental Detective 2: In Action" scripter, and the fourth edition featuried the production team leader of "Extreme Job".

Team leader Ahn So-yeong drew attention by explaining the process of creating the clothes and shoes that patriot Lee Han-yeol (played by Gang Dong-won) wore in "1987: When the Day Comes". The art team leader Park Ok-kyung showed a design cyanide designed to realistically implement scenes related to North Korea that could not be filmed locally and explained that 60 to 80 sets are usually designed for movies, but "The Spy Gone North" actually needed more than 120. Scripter Lee Soon-hye from "The Accidental Detective 2: In Action" introduced 'the director's external hard drive' that records the actor's movements, lines, and comments from the director. Production team leader Park Yoo-kyung (pictured above) from the 16 million hit movie "Extreme Job" is actually the savior of the set and managed to obtain 1,000 chickens for the 22 scenes out of 70.

Actors and directors participated in the campaign as well. The "The Accidental Detective 2: In Action" lead actor Kwon Sang-woo said, "I was confident about my acting thanks to the scripter" and director Lee Eon-hee said, "I hope scripter Lee Soon-hye keeps up the good work". Ryu Seung-ryong from "Extreme Job" said, "There has not been a staff like this. Is she staff or family?", showing his support for Park Yoo-kyung. Director Lee Byeong-heon-I said, "She is a hard worker who works behind the scenes". CJ ENM officials of the film business headquarters claims, "The purpose of the campaign is to increase the understanding of the film's production process and to provide information to prospective filmmakers interested in the profession".

"Campaign to Credit Staffers Earns 80,000 Hits"
by HanCinema is licensed under a Creative Commons Attribution-Share Alike 3.0 Unported License.
Based on a work from this source