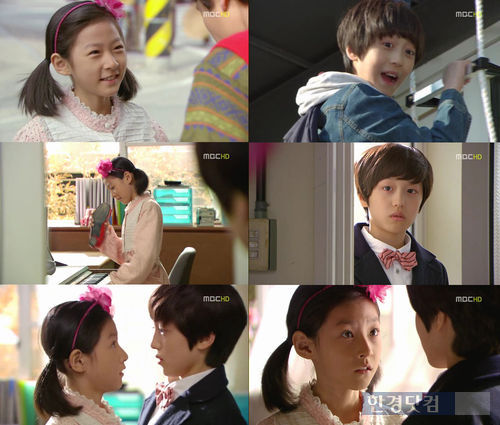 First being broadcast on the 2nd, "Can You Hear my Heart" is about a girl who lives with her 7 year old minded father acting dumb herself and about a man who is deaf but pretends he can hear everything.

Kim Sae-ron, who made Won Bin a 'fool for daughter' through the movie "The Man From Nowhere", took off the dark image and returned as a bright and happy Bong Woo-ri.

Partner role Cha Dong-joo's act Kang Chan-hee is also drawing attention to his acting, making it hard to believe this is his debut drama.

Kang Chan-hee made a strong impression on the viewers and making them look forward to another birth of a talented kid actor.

Meanwhile, Kim Sae-ron and Kang Chan-hee's couple act will continue until the 4th episode of the drama on the 10th.

""Can You Hear My Heart" Kim Sae-ron and Kang Chan-hee kids act, favorable comments"
by HanCinema is licensed under a Creative Commons Attribution-Share Alike 3.0 Unported License.
Based on a work from this source