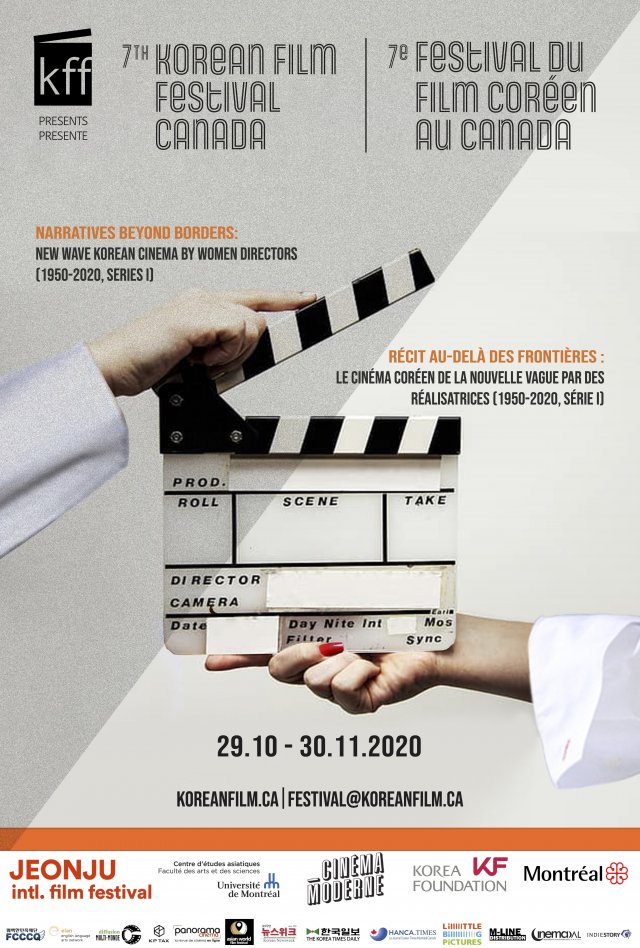 Narratives Beyond Borders: The Korean New Wave Cinema by Women Directors (1950-2020, Series I)

With 22 Compelling Stories by Women Directors from Korea, Canada and the UK

- Based in Montreal, Canada

- Link to purchase your ticket: koreanfilm.ca/ticket (KFFC 2020 offers single tickets for $4.50 and a full pass to watch the entire catalog of films for only $9.50)

- Link to "Support Us" page: koreanfilm.ca/support-us

The 7th edition of the Korean Film Festival Canada features 22 films and multimedia art created by women directors from Korea, Canada and the United Kingdom. From Oct. 29 to Nov. 30, 2020, the online festival will feature rare and compelling stories that highlight the theme: Narratives Beyond Borders: The Korean New Wave Cinema by Women Directors (1950-2020, Series I). All films are accessible online, allowing audiences in both Canada and Korea to watch the films, with a select few films available worldwide. Our vision is to ensure that women's cinema reaches the broadest audience possible. The selected works showcase the colourful voices and perspectives of women in Korean cinema.

"Lucky Chan-sil" (2019) by Kim Cho-hee, is a lighthearted comedy, which combines fantasy with drama, to examine the modern Korean film industry. Based on the experience of the director, the film follows a woman in her 40s who struggles to find a new job after the death of the director and producer she worked with for many years. Unemployed and broke, she takes a job as a maid for an actress friend, and meets people who inspire her in myriad ways. "Lucky Chan-sil" will open the festival, along with "I'll Be Seeing HER": ﻿Women in Korean Cinema (2003) by Kim So-young-I.

"I'll Be Seeing Her" is a collection of Korean cinema footage from the 1950s to the early 2000s, which gives an historical and panoramic view of women in film.

Yim Soon-rye's "Whistle Blower" (2014) and Boo Ji-young's "Cart" (2014) are socially conscious dramas based on real events. "Whistle Blower" is a fictionalized account of the stem-cell hoax that shook Korean society and the scientific world in 2005. At the centre of the scandal was Korean scientist Hwang Woo-suk, who falsely claimed that he had successfully carried out experiments cloning human embryonic stem cells. The film focuses on the investigative journalist who works with the "Whistle Blower". The story of Boo Ji-young's "Cart", a story about solidarity among women workers, is based on the strike organized by part-time female workers at a supermarket in Korea, which began in 2007 and lasted for 510 days. Featuring an ensemble cast, it is the first commercial film to deal with the problems of part-time workers and received praise after premiering at the Toronto International Film Festival. Shin Su-won's feature film, "Passerby #3" is about a middle-aged woman who quits her stable job to write and direct her own movie. Her teenage son is a member of his high-school band. The film experiments with musical genres while depicting the difficulties the protagonist faces as an aspiring woman filmmaker. See below for info about Shin's short film.

Shorts and Documentaries from Korea

Shin Su-won's short film "Circle Line - Short" (2011) delivers the powerful story of a middle-aged man who spends his days riding the subway because he can't bear to tell his pregnant wife and teenage daughter that he has been fired. The film won the Canal+ Prize for best short film at the 2012 Cannes Film Festival. KFFC is also proud to highlight two up-and-coming filmmakers: Kim Bora and Ahn Ju-young. Kim Bora's first feature film, "House of Hummingbird", was shown at the 2019 Fantasia Film Festival, and received numerous international awards. Her first short film, "The Recorder Exam" (2011) tells the story of a 9-year-old girl finding her place within her family and the world. It received the Best Student Filmmaker Award from the Directors Guild of America.

"A Boy and Sungreen" (2019), the debut feature of Ahn Ju-young, is a coming-of-age dramedy about the friendship between Bo-hee, a shy teenage boy, and Nok-yang, a sassy, adolescent girl. When Bo-hee finds out that his missing father, allegedly killed in an accident, might be alive, Nok-yang helps him search for the man. The film plays with traditional gender roles throughout, challenging our expectations. Though their personalities differ, the teens bond over the common experience of living with a single parent.

Helen Lee is known for her explorative work on gendered subjectivities in cinema. Her short film, Prey, appears as a simple love-at-first-sight story, but ultimately challenges the audience by playing with gender and cultural stereotypes. Award-winning filmmaker Ann Shin's "The Superfoods Chain" (2018) exposes unsustainable agricultural practices in different parts of the world as well as its impact on farming and fishing communities. "At the Bottom of the Sea" (2019), the most recent short film from up-and-coming filmmaker Caroline Sojung Lee, explores the rise of feminist movements in Korea.

This year's festival has expanded to include multimedia artworks. Award-winning artist Youngmee Roh from Korea focuses on moving images with her films Parsley Girl (2018) and Ah Ah Ah (2015). Similarly, the multi-media artist Zadie Xa, from Canada, based in London, uses performance, video, painting and textiles to offer a unique audiovisual experience that explores themes of cultural identity in Iridezcent Interludez (2018), Flooded with Ice/Hellfire Can't Scorch Me (2018), and Grandmother Mago (Child of Magohalmi and the Echoes of Creation) (2019).

The KFFC's 7th lineup is comprised of 12 feature films by 11 female directors from Korea, five documentaries and seven shorts, which include multimedia art. KFFC features two crowd-pleasers, five independent dramas, and five documentaries. Among these, four are debut features: "Passerby #3" (2010) by Shin Su-won, "Lucky Chan-sil" by Kim Cho-hee, "A Boy and Sungreen" by Ahn Ju-young and "Gag-Women" by Lee Eun-gyu.

KFFC 2020 offers single tickets for $4.50 and a full pass to watch the entire catalog of films for only $9.50. For more details, please visit koreanfilm.ca/films.


All box-office proceeds will be donated to art and women's film organizations in Quebec and Korea to support artists during the global pandemic. This year's festival is made possible with the collective ethos of the team who volunteered their time and talent over many months.