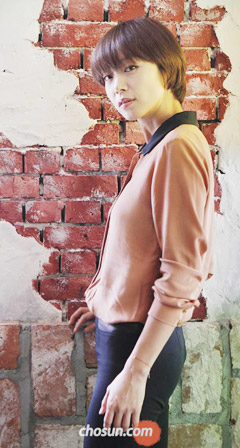 Jeon Do-yeon is one of the most versatile actresses around, having played a wide range of roles including an innocent country girl, a single mother having an affair, an HIV-positive call girl and a chaste widow from the Chosun Dynasty.

But there is still something missing from her body of work: a mass audience. Although her movies have not exactly drawn small crowds, she has yet to star in a film that has sold more than three million tickets at the box office.

For Jeon, this is the missing piece of the puzzle and a nagging concern she hopes to redress with her latest film "Countdown", which was released on Thursday. High-octane action sequences and pursuits make the flick her most commercial to date and it looks destined to fill theaters nationwide.

"It's much lighter and easier to enjoy than my previous works", she said last week, "so I'm confident. I hope this can smash the three million barrier".

In "Countdown", the 38-year-old actress plays the role of a femme fatale, a beautiful scam artist with a penchant and flair for deception. She lures men and extorts money from them for a living. This marks a continuation of the bad-girl characters she portrayed in "Happy End" and "The Housemaid - 2010". It is almost as though she was born to be a femme fatale, such is the ease with which she slides into the roles.

But Jeon said there is more than meets the eye, both to the characters and to the actress herself.

"On a superficial level, they can be seen as bad people. But I think you should also question whether that's all there is to it. I enjoy acting out the other dimensions that make these characters less black and white", she said.

Jeon said she felt weighed down by the nickname "Queen of Cannes", a moniker she picked up after collecting the Best Actress award at the Cannes Film Festival in 2007 for her role in "Secret Sunshine".

"That gives people the misconception that the films I appeared in must be somehow very complicated or hard to understand", she said. "I get sent fewer scripts now than before I received the Cannes award. But I like [and am open to] good movies and TV series of any genre as long as they are well made".

It has been 13 years since Jeon made her feature film debut with "The Contact" (1997) and she has subsequently risen to the top ranks of her profession in Korea.

"I wasn't typical 'leading woman' material, the kind of girl who has elegant facial features and is very tall. But I think the reason I can still act well is because I never subscribed to that pretty-girl image", she said.

"Of course I like to wear pretty clothes and look attractive. But when it comes to work, I channel everything towards accurately conveying the character I am playing -- regardless of whether she is bad, mean or ugly".

Apparently, Jeon discovered that the secret to becoming a great actress is knowing when to leave one's ego in the dressing room.