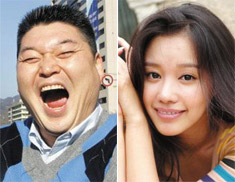 An NTS official said Kang was fined after a tax probe found he inflated his expenses.

In a press release through his agency, Kang said, "I've been fined hundreds of millions of won by the NTS, which I'm going to pay faithfully. I apologize that my name has been mentioned in an unsavory case".

He said he cooperated fully with the investigation through his lawyer and tax accountant. "I disagreed with some of the NTS arguments that did not recognize some expense accounts, but the NTS came to the conclusion that I paid less tax than I should have done".

As the host of major entertainment programs on three terrestrial TV networks, Kang is paid about W10 million (US$1=W1,070) per show. He also runs a restaurant franchise.

Kim Ah-joong (29) has also been fined hundreds of millions of won after a probe of her income tax returns over the past few years. She recently parted ways with her agency, with which she had worked during the period the tax probe covered.

"Celebrities Fined for Tax Evasion"
by HanCinema is licensed under a Creative Commons Attribution-Share Alike 3.0 Unported License.
Based on a work from this source