Celebrities Pitch in to Back Candidates in General Election 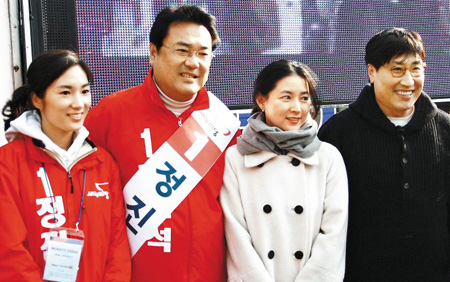 As the April 11 general elections approaches, celebrities are rolling up their sleeves to support their favorite candidates. Candidates with connections in showbusiness say they are receiving a huge boost in their campaigns.

Actress Lee Young-ae and her husband appeared at a political campaign rally for Chung Jin-suk, a former senior secretary for political affairs at Cheong Wa Dae. Lee and her husband are friends of Chung, who is running on the ruling Saenuri Party's ticket.

Actress Yoon Se-in, a daughter of Democratic United Party candidate Kim Boo-kyum who is running in Daegu, went to the southeastern city to help out as soon as filming ended for her TV drama last month. 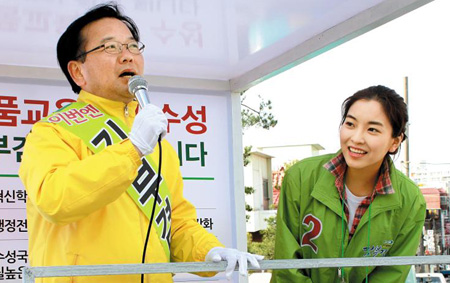 Actor Song Il-gook, the son of former actress and Saenuri Party lawmaker Kim Eul-dong, is going all out to help his mother get re-elected.

DUP lawmaker Moon Hee-sang is getting a campaign boost from his niece and former Miss Korea Lee Honey. Lee also helped her uncle in his general election campaign in 2008.

Candidate Kim Han-gil is supported by his wife, the actress Choi Myung-gil. At a recent campaign rally, actresses Hwang Shin-hye, Shim Hye-jin and Son Chang-min were also lending him their support.

"Celebrities Pitch in to Back Candidates in General Election"
by HanCinema is licensed under a Creative Commons Attribution-Share Alike 3.0 Unported License.
Based on a work from this source