Celebrity goodwill ambassadors not so 'good-willed' 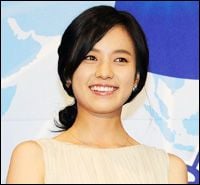 On Monday afternoon at the National Assembly's audit of the Ministry for Food, Agriculture, Forestry and Fisheries, pop princess Lee Hyori became a hot issue.

Rep. Kim Sung-soo of the ruling Grand National Party criticized senior ministry officials for having appointed Lee as a goodwill ambassador for "hanwoo" or homegrown beef cattle, claiming she is "too expensive" and "inappropriate" for the job.

According to the ministry, Lee was paid about 360 million won ($310,000) for appearing in TV ads and other promotions. It's more than three times as much as that of Choi Bool-am, a veteran actor.

"Lee has recently been involved in a plagiarism scandal and it doesn't make sense that she should represent one of the best things Korea can offer and be paid a substantial amount of money for it", Rep. Kim said.

Lee was not the only one accused of being excessively paid and singled out at the audit. Rep. Lee Ae-ju of the GNP denounced the Ministry of Health and Welfare for being ignorant of the payments that the Community Chest of Korea makes to its goodwill ambassadors.

The charity group heavily depends on governmental subsidies for operations. "Those celebrities do not show up at the office or do any work but are paid regularly. Do you think that makes sense?" Rep. Lee said.

The disclosures drew instant public attention to the goodwill ambassador system, where rows of celebrities are appointed to promote certain charity or social events.

Many public administrations or agencies admit that the goodwill ambassadors do not work for free and that they sometimes require a certain amount of money. The Gyeonggi Provincial Government has appointed a total of 32 goodwill ambassadors for a variety of events and organizations between 2008 and April 2010 and spent 38 million won.

"The money is mostly used for inviting celebrities to events, paying for their outfits, makeup and other expenses", an official from the Center for Freedom of Information said.

Ordinary citizens who are motivated by the goodwill ambassadors are disappointed in the fact that these celebrities don't actually have any 'goodwill' or not as "pure" as they thought.

"I thought they worked for free and genuinely cared about the public events or products they promoted. It's upsetting to learn that Lee Hyori was paid enough money to buy beef for everyone in my company", said Lee Ji-young, an office worker.

Yet those who hire goodwill ambassadors defend themselves, saying that celebrities are needed.

"Government policies or events are usually complicated and ordinary people are uninvolved or feel disconnected. Celebrities fill the gap instantly. I think Lee was chosen for that reason. She is a top star and the amount she has reportedly received is lower than what she could have gotten from advertising other products", a promoter of a state-run corporation said.

Some celebrities do make the rare choice of becoming pro bono ambassadors. Han Hyo-joo, the protagonist of MBC TV drama "Dong Yi", received nothing for working as a goodwill ambassador for the G20 Summit to be held in Seoul in November.

"Han took it as an honor to promote the great event and she never thought about accepting money", Han's agent Yu Hyung-suk told The Korea Times.

"Celebrity goodwill ambassadors not so 'good-willed'"
by HanCinema is licensed under a Creative Commons Attribution-Share Alike 3.0 Unported License.
Based on a work from this source