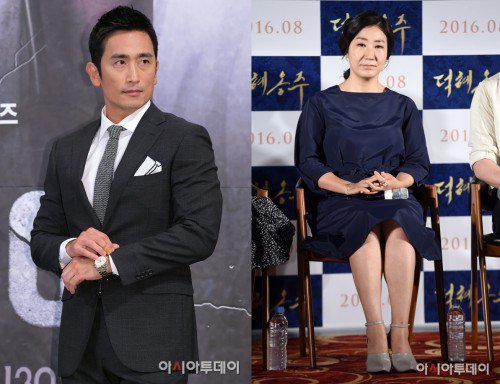 Cha In-pyo and Ra Mi-ranwill co-star as a married couple in KBS 2TV's new weekend drama, 'The Gentlemen of Wolgyesu Tailor Shop' slated for this August.

The drama production company Pan Entertainment has announced on June 30th, "Cha In-pyo and Ra Mi-ran have been cast as Bae Sam-do and Bok Seon-nyeo couple for 'The Gentlemen of Wolgyesu Tailor Shop'".

Cha In-pyo's character Bae Sam-do is a former tailor working for Wolgyesoo (Laurel Tree) Tailor, who used to be a renowned legendary genius tailor in his younger days, however, he is currently running a fried chicken restaurant. Although he is a manly man who regards loyalty as the top priority, he can't raise his voice in front of his wife.

Ra Mi-ran's character Bok Seon-nyeo is the co-owner of the chicken restaurant, who has the power and control over her husband. She may look like someone who is focused on money, but she is a righteous, responsible and warm-hearted person once you get to know her.

The production team said, "The couple will make the drama fans laugh and sob. They will bring the unprecedented entertainment and chemistry to the small screen" and "It is ok to anticipate a lot".

'The Gentlemen of Wolgyesu Tailor Shop' will be broadcast in August once "Five Children" has wrapped up.

"Cha In-pyo and Ra Mi-ran join 'The Gentlemen of Wolgyesu Tailor Shop' as a married couple "
by HanCinema is licensed under a Creative Commons Attribution-Share Alike 3.0 Unported License.
Based on a work from this source