Cha Seung-won, Lee Seung-gi and Go Ara in "You're Surrounded" 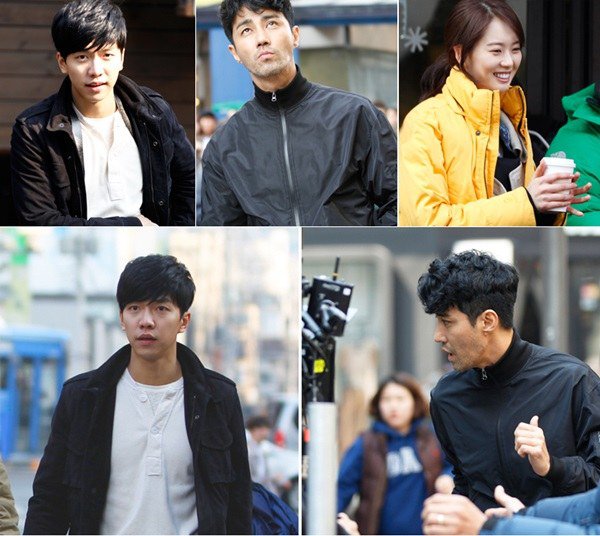 Despite the early morning shoot, the actors and actresses showed up on site with anticipation and excitement.

Lee Seung-gi and Cha Seung-won ran all the while filming a scene where they track down a criminal but never expressed their exhaustion.

In the role of Seo Pan-seok, Cha Seung-won said, "It felt like a fun traditional day at home where cousins and nephews gather together with their uncles. The weather on Saturday was great and I apologize for the space we took up interfering with the citizens' day out".

In the role of Eun Dae-goo, Lee Seung-gi said, " I was nervous became it was the first taking of the drama. However, the set felt as comfortable as ever when the camera started rolling and everyone around me supported me and each other very well. I am excited to be working with Cha Seung-won, Sung Ji-ru and other younger actors and actresses my age".

Go Ara in the role of Eo Soo-seon said, "The atmosphere around the team is really great and we all support each other. I am grateful to be working with such amazing people and I can't wait to come back to work the next day".

"You're Surrounded" is the youthful romance and investigation of young policemen and legendary detectives. To be aired on the 30th of this month.

"Cha Seung-won, Lee Seung-gi and Go Ara in "You're Surrounded""
by HanCinema is licensed under a Creative Commons Attribution-Share Alike 3.0 Unported License.
Based on a work from this source