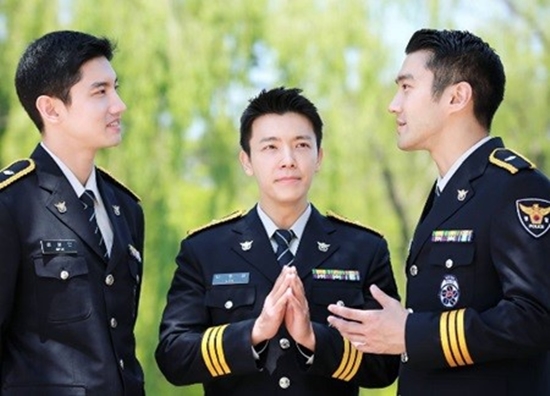 Changmin, Choi Si-won and Donghae, who are currently serving as conscripted police officers, have revealed their recent activities.

On May 20, Seoul Metropolitan Police posted a photo of the three handsome officers on their official Instagram account. The caption said, "Instar trio of Seoul Police Promotion Unit".

In the photo, Changmin, Choi Si-won and Donghae wearing uniform are looking at each other.

The three are currently serving as conscripted police officers in Promotion Unit for the Seoul Metropolitan Police Agency to complete the mantatory military service.

"Changmin, Choi Si-won, Donghae in Seoul Metropolitan Police uniforms"
by HanCinema is licensed under a Creative Commons Attribution-Share Alike 3.0 Unported License.
Based on a work from this source