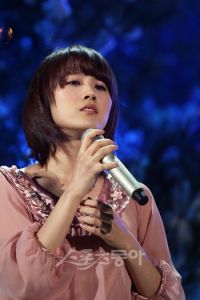 Lee Soo-young was a ballad queen, now she is aspiring to be an actress!

The new drama is "The Accidental Couple" which will be her first drama ever!

Her role is of a woman who is in love with the famous actor who will be Hwang Jung-min.

She has been in sitcoms where she acted as cameos, however, never as a set character.

Lee's character is the actor's little sister (Lee Chung-ah)'s friend as well as a rival to Kim Ah-joong's character. Lee's character has unique and attractive personality and works at a post office!

The drama is a romantic comedy genre!

"[ChanMi's drama news] Lee Soo-young in a new drama"
by HanCinema is licensed under a Creative Commons Attribution-Share Alike 3.0 Unported License.
Based on a work from this source