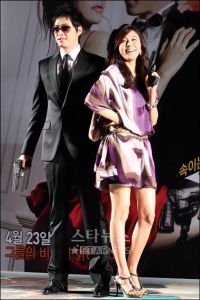 Actor Kang Ji-hwan and Kim Ha-neul have been at the press conference for the new film, "My Girlfriend is an Agent" where they are posing for the cameras.

This new film is about two secret spies who have been lovers and then meet again through a secret plan after their breakup.

This is a comic action film which will be released next month on the 23rd!

"[ChanMi's movie news] Do they look dangerous?"
by HanCinema is licensed under a Creative Commons Attribution-Share Alike 3.0 Unported License.
Based on a work from this source