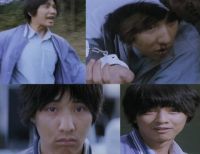 Won Bin is returning through a new film directed by the famous Bong Joon-ho director. The film, "Mother - 2009" has its teaser trailer released on the 7th and has been greatly anticipated since.

"Mother - 2009" is about a mentally challeged young man who is accused of a murder which his mother denies and fights to prove him innocent. This film is about a mother's unconditional love and passion to save his son. The mother character is acted by the talented actress, Kim Hye-ja.

Won Bin's last film "My Brother" in 2004 has been so long ago that the fans are waiting for the release of this new film with big hopes.

We can see Won Bin's great acting even through this teaser trailer. Fans are also greatly awaiting for his transformation into a new character which is so different fron any other characters he has been.

The trailer itself is being a hit online!

"[ChanMi's movie news] Fans can't wait for Won Bin's return!"
by HanCinema is licensed under a Creative Commons Attribution-Share Alike 3.0 Unported License.
Based on a work from this source