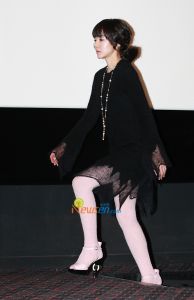 The press meeting for the movie has been held on the 14th and the stars came together.

The legendary fiction Jeon Woo Chi Novels were taken to a modern setting and recreated for this movie! It is a superhero motif with a Korean style.

The troublemaking warrior Jeon Woo Chi acted by Kang, the rivaling selfish elite is Hwadam acted by Kim Yoon-sik, aspiring actress and a femme fatale coodinator Seo In-kyeong is Im, Jeon Woo Chi's friend and a gossiper Choreng is Yoo, Chosun's best martial arts master is acted by Baek, Seo In-kyeong's rival and top star actress is acted by Yum Jung-ah, and lastly, three knights who fought the demons in Chosun Era are back as a monk, priest, and a fortuneteller and acted by Song Young-chang, Joo Jin-mo-I, and Kim Sang-ho are the characters.

This movie will be released on the 23rd! Beware for some modernized legend stories and action fighting demons from 500 years ago!

"[ChanMi's movie news] Im Soo-jung in a black at the press conference"
by HanCinema is licensed under a Creative Commons Attribution-Share Alike 3.0 Unported License.
Based on a work from this source